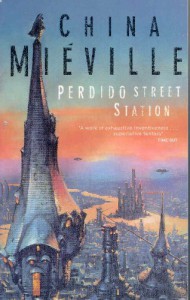 Perdido Street Station is the hub of rail traffic in New Crobuzon, and home to foreign embassies. It is a monstrous building, immense in scale, that is astounding even in a city as ancient and crowded and industrial as New Crobuzon. The novel establishes the civilization: a melting pot of species and cultures that is similar to our industrial 19th century, but far stranger, and more horrifying. The government is corrupt and the laws are cruel. The politics of the novel and a society as heterogeneous as this one are as engrossing as the more fantastic elements of the plot, including the Slake Moths.

Isaac, a rogue scientist and researcher, is commissioned by a bird man, a daruda, to give him back the gift of flight, his wings having been torn from his body as punishment for an unknown crime. He has hunted out Isaac as one uniquely able to help him in his quest. Isaac's research brings him into contact with a strange grub that soon becomes a monster. At that point, the whole city is in jeopardy, and Isaac has to figure out how to stop it. There is a romance angle, too, that pushes the boundaries of the genre and is no less affecting for it. Isaac's lover, Lin, is an outsider artist and broke away from her people to pursue creating art that was more than celebrating a religious line. She is commissioned by a shadowy mob figure, and must keep it a secret, even when strange events start paralyzing the city. Derkhan, a friend of Isaac and Lin's, and one of the few in on their secret, comes forward to help, and as a journalist of an illegal seditious newspaper, has important connections in the city.

Mieville has written a sprawling, fantastic world with 'Perdido Street Station', I'm a bit disgusted with myself for not reading more of Mieville's work earlier, or that of his peers. Somehow, I'll remedy that.