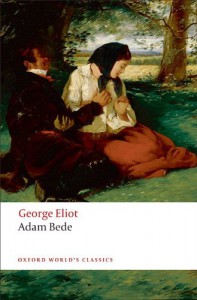 'Adam Bede' was wonderful. It was lush and evocative of the late 18th century and intensely psychological in a way I wasn't expecting at all. In 19th century literature it is so easy to lose sight of how most people lived, spending so much time with the gentry and high-stakes players of the era, with "common people" being Dickens caricatures, however lovingly drawn, and background noise.

I have been holding an unfair grudge against George Eliot for all the wrong reasons. It's not her fault the professor who assigned 'Middlemarch' was the worst of the breed - popular because of incompetence - and made an environment in which it was impossible for me to appreciate the subtlety of her craft.

The core plot is simple - studly rough man loves dairy maid, dairy maid loves local rich dandy, and scene. The characters rise above and beyond their archetypes, however, and their reasons and justifications - especially Arthur's - are deftly treated. Meanwhile, Eliot has drawn a whole community from life. We spend the most time with the Bedes and the Poysers, but the joys and rivalries of small town life and a whole network of people that can only form over a lifetime seems effortlessly to appear on the page. I admire Trollope's Barchester novels for its community of Anglican clergy, but there is something inhibited about them, polite, never comfortable with one another. Which might be true of the Anglican clergy, I suppose I can't fault Trollope yet. But I can't believe in that discomfort in 'Adam Bede'. These characters were at home, which makes events late in the book that much more upsetting. I won't say more about it. Instead -- the green of it! I loved the pastoral, blessed quality the land had about it. The narrator and the inhabitants themselves comment on the beauty of their own spot in England. I didn't need to be told this was written after the Industrial Revolution had made a large mark on England, Eliot not only romanticizes and celebrates country life, she practically canonizes it. The book is full to overflowing with beautiful prose about gardens, orchards, the details of the dairy and where the platters are hung in the kitchen.

An excellent start to my reappraisal of George Eliot. Going in order, I'll pick up 'The Mill on the Floss'