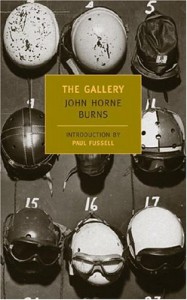 This is a WWII novel, but not one that you would expect. This depicts the Greatest Generation through contemporary eyes, not misty revisionism. They're flawed, in turns cowardly, venal, brave, and compassionate. Combat rarely comes into it, the war is something they dread, or something that's already passed them by.

'The Gallery' is a novel about an anonymous American G.I. crossing the Atlantic and North Africa with the Allied Army, forever behind the lines, and becoming ever-more disillusioned with his country and the future. This stream-of-consciousness narrative, labeled as a "promenade" is framed with nine "portraits" of American and Neapolitan men and women in August 1944. The titular gallery is the Galleria Umberto I, a public shopping gallery, frequented by the Allies and Italians alike.

Naples has been devastated by years of war and the recent bombings. American G.I.'s are exploiting the need of the Italians and the greed of their fellow soldiers, contributing and encouraging an economy where sexual favors are bought with chewing gum, tobacco, and bed sheets.

I found Burns' writing easy to sink into, and each promenade and portrait is extensive enough that I felt satisfied with each as it came to an end. Not that I couldn't have read a hundred, two hundred, more pages of "Momma", the proprietress of a thriving bar in the Galleria that caters to the gay men of the Allied Army and some Italians. It was a generous and funny cross-section of people that were rendered with real love. This was published in 1947 and there's none of the tragic melodrama that I found in 'The City and the Pillar' or 'The Fall of Valor', published shortly before and after 'The Gallery'.

The G.I. of the promenade reminds me the most of Ford Madox Ford's Tietjens when Tietjens muses:

The questioning of America's attitude and approach to the outside world is a cornerstone of the book. Burns holds with no romanticizing of the war effort or its being worthwhile if children witness their liberators throwing away tons of food while they and their families starve or are forced to prostitution to eat.

Other characters include a cowardly Southern man manipulating the system for honors and promotions for himself and cronies, a young woman holding onto traditional love in the face of the debasement of her home city, a Jewish-American officer on the eve of his return to the front desperate to leave kindle hope in the girl he leaves behind in Naples. I wasn't sure what I was expecting from this novel, but this was amazing.