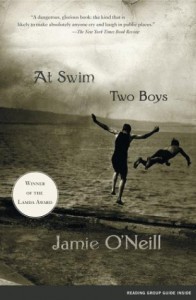 In 1915 Jim Mack works in his father's shop, takes teasing from his older brother in stride and weathers the remarks of the other, wealthy, boys at his Catholic school. Life is fixed. One of the brothers insists he may have a vocation, his father has his own plans for him, and Jim is content to let these decisions be made for him. That is, until the one friend he used to have, Doyler Doyle, comes back after four years absence with a Republican message that shakes up Glasthule, just as the war is shaking the rest of the world. Doyler rekindles his friendship with Jim and forces him to think for himself and inspires greater feelings.

O'Neill writes in a stream-of-consciousness indebted to Joyce, certainly, but, after the initial plunge, the thoughts of the characters are clear and understandable. It is a beautifully written novel, and while most of the attention deservedly goes to the love between Mack and Doyle, and the philosophy of McEmm, their families are inextricably a part of the narrative. The boys' fathers, Aunt Sawney, Nancy, and Eveline McMurrough broaden the perspective of the novel so it truly encompasses the great changes that took place on all social levels in Ireland in the space of a year.