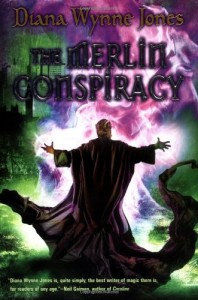 The sequel to 'Deep Secret', 'The Merlin Conspiracy' is narratively split between 'Secret's Nick, and Roddy, a girl from the world known as Blest. The Isles of Blest, essentially Great Britain and Ireland, are the magical hub of hundreds of worlds in the Magid multiverse. The common tradition of magic on Blest has continued for thousands of years, all of it being tightly interlaced and building off of each other, it's a delicate balance that must be maintained.

Roddy and her friend Grundo are both children who travel with their families in the King's Progress. In their England (Wales, Scotland and Ireland remain independent), magic is guided by the Merlin and the Lady of Governance with a tradition of the King and Court moving constantly across the country as additional protection. Soon after the old Merlin dies unexpectedly Roddy and Grundy overhear conspirators planning on gaining control of the magic of Blest. The only problem is, part of the spell is that nobody will believe it. In desperation Roddy calls up Nick, hoping for a powerful magic-user to help stop Blest's magic from being overturned. Unfortunately Nick has a great deal of talent, but no training to speak of yet.

This was a fun read and a great improvement, structurally, on 'Deep Secret', which had been hampered by being a single-perspective report. Blest is an interesting world, if a bit anglo-centric even for Jones, and she really knows how to write about magic. Some of the peripheral characters I could have done without, the Izzys - seriously?, and Nick was one of the last characters I would have wanted more of from 'Deep Secret', but Jones' writing is a pleasure, especially in cases like this where she rambles and spreads out (almost 500 pages of Jones, yes!). She avoids her usual sequel pitfalls and delivers a satisfying YA novel.