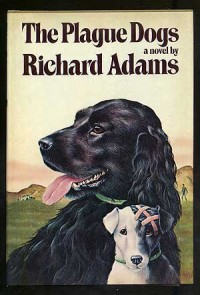 I had an argument with a co-worker this afternoon. This is something I try to avoid at all costs, because usually arguments are tiresome and boring, because neither side is willing to give any ground and mostly just want an excuse to air their own ideas, to hell with listening or hearing what the opposition have to say. I can be guilty of that, absolutely, but usually I'm willing to hear out an opening line before I realize the other person is an idiot.

But, what can I say, I am a terribly earnest person sometimes and my co-worker is who internet trolls model themselves after. And furthermore, even with a circular argument, being forced to explicate an abstract idea to an audience (even a hostile one) allows one to refine and understand that idea even better, right? So I'm not a complete masochist. I don't think....

We ranged over several subjects, but, as you may have guessed, what really concerned me was the idea of animal rights. He thinks the whole idea is ridiculous. According to him animals are things, sometimes they are useful or good eating, but they don't inherently deserve any better treatment then what they physically need before the axe comes down. Me and my sentimental attachments were scorned. "See how long that pet is your friend if you don't feed it."

Uh-huh. Can't argue with that. Readers remember that line as I further talk about this coworker: not bright. Maybe I am a masochist, because I could not bring myself to stop the conversation for a long time.

That line of thinking, about animals being useful tools and nothing more, is what the people of the Lakelands and the people in the laboratory thought in 'The Plague Dogs'. And there’s a certain rightness to that. Adams' being a similarly earnest person to myself highlighted the crueler aspects of testing facilities in his representation, which also wasn’t wrong. I don't think anybody reading the book should believe that anyplace like A.R.S.E. actually exists, but as a caricature to satirize the empty research that has been promoted in the past and to broadly raise the ethical questions about animal research it served its purpose. My problem with the book was less in how blunt it sometimes was, but in how the narrative never seemed to come together.

On further questioning, my co-worker admitted to never possessing any particularly feelings of affection for numerous pets his family had growing up. In an eerie parallel to Rowf in 'The Plague Dogs', he used to take his hamster in its exercise ball and place it in a full bathtub. Seriously? Apparently so, and why, you may ask? He just wanted to see how long the hamster would last underwater and how many times it could take it. It could take a lot. I was laughing in a "oh my God you crazy piece of shit, stop breathing my air" kind of way when I told him I would have had him institutionalized, but I really wish someone had noticed that kind of behavior when he was younger. I think all of us had a phase or have a streak of childlike curiosity that's cruel but that? So much for kids taking wings off flies. He thinks bullfighting is awesome, too. Also: dogs, roosters, beta. If it will fight to the death, that's tits.

'The Plague Dogs' doesn't work on the narrative level that 'Watership Down' did probably because this project came straight from the heart. Adams read some upsetting reports and wanted to get why he was upset down on paper. Here in black and white were descriptions of isolation experiments, mutilations, poisonings and the ubiquitous spraying of aerosol products into rabbit's eyes. What Adams' had a problem with, and what I have a problem with when it comes down to it, is the idea that because research doesn't necessarily have to justify itself to anyone there are those who will poke and incise and eviscerate without any introspection or any silly treehugging notion about the lack of humanity in their actions. Adams was going for black humor sometimes but the satire elements, especially concerning government, never got off the ground for me, all I wanted was for the narrative to go back to what the dogs or even the reporter were up to.

In a condescending tone I was told that after bullfights, after being poked and spouted and hamstrung for several hours, the bull is served to needy people. Such largess! I wasn't suitably impressed, which led to my eating habits being challenged. It never ended. After the usual back and forth he came out with the fact that my cow being rendered unconscious by electrical current before being efficiently bled out was too clinical? I'm a hypocrite unless I kill it myself? He then tried to console me that his girlfriend thought the same way I did so I didn't have to feel bad about it. I don’t get upset easily, and even that level of patronizing validation didn’t provoke me to saying something that would make the workday awkward, but damn. I checked out at the point.

'The Plague Dogs' was piecemeal, with not enough satire to make it work as satire and not enough animal shenanigans to qualify as a real adventure, his attentions were good but it never felt focused to me. And I am not one of those people who think that Adams is only good with animals - I really enjoyed his horror-suspense novel 'The Girl in a Swing'. What saved the book was the ending, schmaltz and yanked heartstrings and all, I ate it up.

I failed to get my position across to my co-worker, not that he cared to begin with. Animal rights are not about treating animals "better" than humans or anything like that. I may not like the idea of some animal research, but I will never argue that it isn't necessary. Sometimes the pragmatic person euthanizing an unwanted litter is doing the right thing. I also have larger, softer ideas, that are more about our responsibility to those creatures, domesticated or not, that provide us with valuable services, from the something as intangible as companionship or a brief sighting of a wild anything on a walk to that very real patty on a sesame seed bun. People like my co-worker are not the majority of course, but it unnerved me to come across someone who at the most fundamental level could not understand that obligation, slight as it is. Adams must have felt similarly when he began work on this book. You can go all your life thinking a certain way, holding certain beliefs, but when you’re suddenly confronted with a perplexed stare and a why do you care, well, sometimes the words just don’t come out right. I'm glad he made the attempt.

I did warn you that I could get terribly earnest.