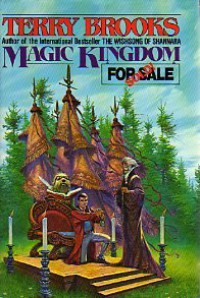 Nostalgic reads are always dangerous territory. To be honest, I was willing to risk this reread nuking any fondness I had for the book. When I first read this at 13 or 14 I remember thinking it was a cool idea and that it had humor -a talking dog, haw!- but was disappointed even then that it had left so much left unsaid by the end of the book. I'd been warned away from the Sha na na books already, and when a not-very-serious writer decides to kick back and knock off some light-fare the results aren't pretty. Comedy is hard. At the time I first read this the sequels were unavailable to me and so I resolved to read the sequels if and when I came across them. It took over a decade, but I came across not only a copy of 'Magic Kingdom for Sale--Sold!', but the first two sequels, too. It was fate. It was a new year. I took the plunge.

Ben Holiday is a widower and a successful litigator in Chicago when he comes across an unusual ad in Rosen's Christmas Wish catalog. A Magic Kingdom for Sale? Despite his doubts, Ben pursues the ad and, desperate to leave behind memories of his dead wife and child, and the frustrating circles of law, he buys Landover. Of course, things are not quite as advertised.

The characters are transparent and the magic kingdom threadbare, as a young reader I was happy to fill in personality gaps and overlook the spotty details, but as an adult 'Magic Kingdom' is a head-scratcher. The royal household tries to play an inferior wizard and a pompous man-turned-dog for laughs, the kobolds do everything else. Brooks scales back the world building to trees that provide nourishment, some talk of Fairy, and introduces the reader to generic feudal lords, disinterested healing fairies and fist-shaking trolls. Also, Holiday's frequent reveries of his deceased wife Annie on top of his interest in Willow's "child-like" beauty is creepy. The new king ought to found an S.V.U., or there's going to be even more trouble with the natives.

One could have gone anywhere with this premise, reams of paper could have been spent developing a world for person who actually should have everything spelled out for him. Brooks instead goes with a couple info-dumps and a written montage of Ben Holiday a-studying the books and land. The book doesn't end in a cliffhanger, like I remembered, it does leave a lot of loose ends. My younger self must have been as dissatisfied as I am now, but lacked the the ability to express it. 'Magic Kingdom' stands alone alright, but I told myself I'd keep going, so I'm gonna keep going.

Next: 'The Black Unicorn'