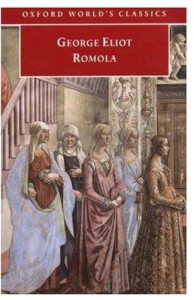 Eliot leaves England and goes back some 350 years for 'Romola', to 15th century Florence, and tells a story about love and betrayal, revenge and forgiveness. It will never be as popular as her other novels, but it deserves attention as it was a novel that Eliot believed in and spent a great deal of time and effort in crafting it.

Romola de'Bardi has lived a quiet, studious life with her father, a classics scholar whose gone blind. Her brother deserted her atheist father to become a monk and she must provide the support he needs to complete his work and help ensure that her father's collection is donated, intact, for the public good of the city. Their life is shaken when the young and handsome Tito Melema shows up at their door and agrees to help. In fact, Tito is agreeable to everyone, and quickly becomes an indispensable part of the political and academic communities. Of course, he has a terrible secret that could destroy his reputation.

The Florence of the renaissance is brought to vivid life in these pages, the death of Lorenzo de Medici "the Magnificent", the reign of Savonrola, conversations with Machiavelli and other scholars abound. That is only the setting, however instructive it is, the meat of the story is the conflict of the upright Romola with Tito Melema, whose original deceit is compounded by guilt and fear until he becomes entirely selfish and heartless. Romola, educated by her father, is a rarity in her world, and has to struggle alone to do what she believes to be right. Her beliefs are challenged and she is full of doubts for much of the novel. This was a long, thickly detailed novel, less passionate than her earlier novels, but makes up for it with clean prose and commitment to the period.

This novel would have ranked with 'The Mill on the Floss', but the ending was a trifle underwhelming, I wasn't sure what I would have preferred instead though. I suppose the ending was fine. My sole problem then is

that we had taken this long journey through Renaissance Florence and Romola had gone through so much suffering, had even chosen to suffer. Then she finally does escape her marriage and Florence without getting guilt-tripped into turning around, and she ends up becoming a vision of the Madonna to a plague-stricken village.

That aside, the novel is worthwhile, with little that detracts from the experience. A great experiment and important, too, because without the struggle of this novel she likely would not have written 'Middlemarch'.