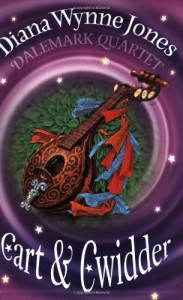 It has been seven years since the death of Diana Wynne Jones, and I've been a fan of hers since childhood, but I had never read this series before.

The Dalemark Quartet, arguably the most effective series Jones ever wrote. Jones' genius didn't lend itself to sequels. When she created a world and characters she said all that she wanted to say in that first volume. That's why many sequels often had mostly new sets of characters, if not new worlds, and often, fell flat. Dalemark is a magical kingdom divided among feuding lords, with a sharp division between those in the North and those in the South. Ideology, prejudice, and history must be overcome and its fate rests in the hands of children, sometimes scattered over centuries.

'Cart and Cwidder' is the first novel of the series, and follows Moril and his siblings as they travel as musicians in their parent's cart. A journey across the treacherous South is dangerous enough without a price on their heads and being armed only with an ancestral cwidder, a musical instrument rumored to have rare powers.

This is a classic Jones novel, and I enjoyed the interplay between the young characters. It sketches out many elements of the plot that will be revealed as the story continues. In particular, the rules of magic were noteworthy, and the hints of the Undying, to be revealed further in later novels. This is a complete adventure, and can be read by itself.