The Eye of the World, The Wheel of Time #1 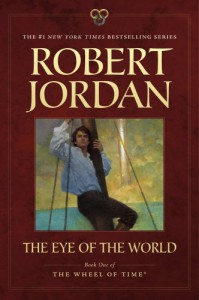 The Wheel of Time has become one of my absolute favorite series. I read 'The Eye of the World' many, many times and spent countless hours dreaming about this world that Robert Jordan had created. As the series went on (and on) it suffered by comparison with other books, reading the last five or six books only once, but I've found myself coming back to it and falling in love all over again. This time around I'm following the reread by Leigh Butler and discovered a new blog on Tor.com where a reader is discovering the series for the first time. I've never had much luck convincing friends to read what I'm loving at the moment/forever, so its fun to read along and discover the fandom attached to this particular series.

The world is driven by magic, two complementary sources of the One Power divided between men and women. The man's half was Tainted thousands of years ago, cursing all men born to channel it to be driven mad and must be hunted down before they can cause another Breaking of the World. Women have power in 'The Wheel of Time', and there are no shortage of strong female characters, complex villains, and a lot of moral grey areas for a story about a conflict between the Light and the Dark. There is a legend that a hero will come, The Dragon, a reincarnation of a powerful male channeller who will save the world from the Dark One - but not without a terrible price.

Some time ago I parted with my crumbling mass-markets, so I'm taking advantage of my bookstore connections (I couldn't convince my friends to pick up a book, but I make a living that way now, ha) and am buying the trade paperbacks with the new cover art.

'The Eye of the World' has many deliberate parallels with 'The Lord of the Rings', and so starts out in the remote community of the Two Rivers. Summarizing of 'The Wheel of Time' is something best left to professionals, so I'll just touch on the very beginning:

Rand al'Thor doesn't have much more on his mind then meeting his friends for the festival of Bel Tine and figuring out his feelings for pretty Egwene al'Vere. He sees a frightening figure in black on the road to Emond's Field and his life is changed after that. There is a deadly attack on the village by monsters thought to be mythical, and they were looking for someone. Rand finds himself, along with his friends the mischievous Mat Cauthon, the steady and faithful Perrin Aybara convinced by Moiraine, an Aes Sedai (a powerful magic user) and her bodyguard, or Warder, Lan, to leave their home immediately in order to protect it and themselves. Egwene discovers their plan and insists on coming so she can see the world outside. A traveling storyteller, a gleeman named Thom, joins the party, too. They are not too far out of the village before they are tracked down, literally, by the young village Wisdom Nynaeve al'Meara. She has been a mentor to Egwene and a leader in the village and feels responsible for the young people being dragged out into the world for dubious reasons.

The series is known for its length, roughly 11,000 pages altogether, and it's detailed world-building, but there is a lot of action in these first books. The story is almost completely from Rand's perspective with only as-needed POVs from Perrin and Nynaeve. Later books featured dozens of POVs - there must be a count somewhere, I would be surprised if it was well over 100 - but 'The Eye of the World' was about Rand's journey into the outside and his first steps on the road to his destiny. He explores a cursed and ruined city, meets a beautiful princess named Elayne, travels incognito on the ship of a collector of antiquities, 'plays for his supper' in taverns on the run, is hunted by darkfriends (people sworn to the shadow), witnesses ancient magic, travels to the decaying Blight and witnesses monsters firsthand. Along the way he befriends an ogier named Loial. Ogier are ten feet tall, live for centuries, and revere the written word. Loial is impetuous and set out on his own to explore the world, but is often confused by how different the world is from the old books he's written. He's wonderful.

It is amazing to read these characters all over again and see how far they come. They are altered forever by this journey, and this first quest ends up being only the beginning of a long road. There are flaws and regrettable errors in this series, but they came from Robert Jordan wanting to create this diverse, inclusive, complicated world, and he was from a background where certain possibilities didn't occur to him. He gets a lot of respect from me. These books are such an achievement and opened so many doors for me as a reader. I'm thrilled that I'm loving this book just as much now, without reservation, as I did when I was 13.

Next: 'The Great Hunt'