Winter's Heart, The Wheel of Time #9 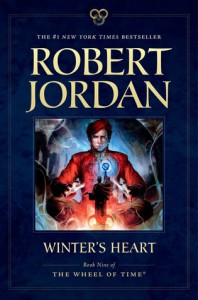 As part of the series as a whole, the book is a definite upswing. 'The Path of Daggers' had left most of the main cast at a standstill and triggered my least favorite plot-line of all time - or Plotline of Doom as fandom has it - wherein Faile, Morgase, Two Aiel and some others are taken captive by the Shaido, necessitating a distraught Perrin to hunt them down. This slows down the 'meh' plot-line of getting Masema to Rand.

But the good! 'Winter's Heart' brings Mat back into the narrative, at some distance behind the rest of the characters so there's a good deal of time spent with him in an Ebou Dar occupied by the Seanchan. Thom and Juilin appear.

Perrin, as can be guessed, is trudging forward on a never-ending quest to save his wife and dealing with some sigh-worthy conduct of Berlaine and other characters in the camp who believe Berlaine.

Elayne is doing Succession things with Aviendha and Birgitte, which is on the dull side, and again, takes forever, but it is refreshing as it is tedious that complicated problems in 'The Wheel of Time' require complicated solutions. Nynaeve has less marital bliss reported and more frustrations with the Seafolk and the Kin, who are all still cooped up in the Royal Palace in Caemlyn.

Egwene continues to ratchet up her influence as Amyrlin. Siuan and Bryne hang out in the background.

Rand, I would say of course but his story-line has been sputtering since 'Lord of Chaos', elevates 'Winter's Heart' more than any other plot. It is one of the most epic parts of the series and I remember it blowing me away when I first read it. Now, it is still pretty awesome.

'Winter's Heart' had a lot more forward momentum to it - unfortunately, its about to come to a screeching halt.

Next: 'The Crossroads of Twilight'

Previous: 'The Path of Daggers'