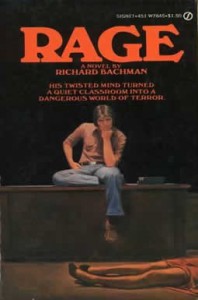 Charlie Decker, after hearing he's been expelled, takes a gun from his locker, sets a fire, and then returns to his classroom to shoot a teacher. The book is short, barely clocking over 200 pages, and from Charlie's perspective the reader tracks his holding his classmates hostage, one-upping authority figures, sharing memories of his abusive father, and ultimately earning his peers' respect and loyalty. The one person who resists, a popular boy, is ultimately punished. Of course this book fed into sick dreams and can be linked to several school shootings in past decades. The book is a revenge fantasy made all the more effective by being written by an author as capable as King.

The first draft of this novel was written while King was in high school, but he must have heavily revised it and rewritten it before publishing it under the Bachman pseudonym in 1977. Despite that, the book begins to fall apart when you look closely at it. The problem is that while the students in the classroom are suffering from shock, without giving anything away, it is not believable how completely they go over to Decker's side and the lengths they go for him. The story propelled me along, but I couldn't shake that disbelief.

The main problem is of course the end. I would have liked to have had a little more closure and a little more than teasing hints of what the aftermath of the incident was. The fact that it is not a great book to begin with plus the very real negative effects a book like this can have on someone with issues means I  have no problems with this one staying out of print.