Pages From A Cold Island by Frederick Exley 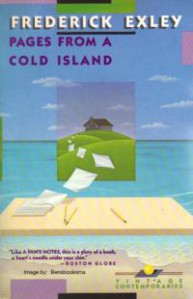 Frederick Exley was a writer of autobiographical novels - memoirs, really, with places and people's names occasionally changed. He had some acclaim from 'A Fan's Notes' which followed his path in an out of psychiatric hospitals in the late 50s and early 60s. He was a down-and-out loser, lover of women and Frank Gifford, and savagely funny. 'Pages From A Cold Island' picks up four years after that novel's release in 1968 and finds Exley sunk deeper into alcoholism and eccentricity.

The Cold Island refers to the island he is staying in off the coast of Florida, and he belabors that it is a metaphor for himself. Exley is drinking, staring at the manuscript of 'Pages From A Cold Island', the book that was to quickly follow 'A Fan's Notes' and ensure his literary fame, and thinking about what books he'll have his students read at the Iowa Writer's Workshop course he agreed to teach. He is stunned when he reads about the death of his idol Edmund Wilson.

The novel can't hold on to a narrative. It covers some sloppy anecdotes about Exley's life in Florida and how he fled the New York Literary Scene that includes a seriously off-base interview of his with Gloria Steinem. It covers his quest to research and properly eulogize the genius of Edmund Wilson. At the very end there's a brief and very effective sketch of his time at the Iowa Writer's Workshop.

I often wondered as I read this book what were in the abandoned pages of the 'Cold Island' manuscript that is so often mentioned in the text here. Exley lost his confidence somewhere along the way and, though willing to publish sexual exploits and bar anecdotes and getting the shit kicked out him by a lover's jealous boyfriend, we rarely get a glimpse of the individual that made 'A Fan's Notes' so compelling. There is a pang when he realizes he can't confess to an acquaintance that depsire having two daughters of his own, one with each ex-wife, he never saw them come into the toddler stage. That might have been his only vulnerable moment that he confesses to. It's ironic that his summation of Steinem after their failed interview was that she wouldn't be taken seriously until she and her sort became 'becomingly vulnerable' and admit to being susceptible to love. It was the capstone on a bizarre and creepy chapter.

'A Fan's Notes' was a work of genius and everything I've read has told me, and told me again, that it was the best and only thing that Exley wrote. In my review I wrote about how much of what he writes would run afoul of the PC Police these days, and that's true, it is shocking, but there was a shattering honesty in what Exley wrote then that made it easy to forgive even his cruelest jokes. It also helped that even the crudest elements were still funny in part because they were horrifying. 'Pages From A Cold Island' has much that is shocking and reprehensible, but though Exley is quick to debase himself and shares plenty of humiliations, its not funny anymore.

Next: 'Last Notes From Home'