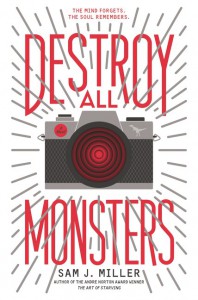 Ashley and Solomon have been best friends since they were little, but ever since the accident when Ash fell out of Solomon's treehouse when they were 12 there's been something wrong. Her memory of that day is gone and Solomon has retreated to a world in his head.

Ash has concerned parents and a healthy network of friends at school. She has a mentor, a retired photography editor, and doesn't feel the need to "fit in" at school to be happy. Her goal of creating a project worthy of getting her into her favorite art school seems within reach. Her one worry is that Solomon is losing control of the line between reality and imagination and might not be able to function in the real world for much longer. They're not children anymore.

In Solomon's world, the people are divided and fight corrupt authority with spells and dinosaurs. There he is chosen for great things, and with the help of his camera can maybe bring the city back together. His best friend Ash is a princess in a near-catatonic state.

Things get weird when Ash sees through the lens of her camera some dinosaurs or shit and realizes she has to figure out what's going on with Solomon or end up like him, too.

Do I need to go on? Sam J. Miller has written about mental illness and magical powers as metaphors for each other before. I didn't read 'The Art of Starving', but I hope its a good deal more subtle than this.

Solomon's withdrawal makes perfect sense with what the reader discovers about him, but his fantasy world is a selfish wish-fulfillment scheme and it doesn't make sense that Ash is drawn into it. Like, at all. I mean, couldn't his power over there have to do with music since that was the talent Ash admired in him? Why did he have to take her thing (photography) AND make her a passive object for most of the book?

There is a whole other plot-line in the real world where Ash seeks out a group of people who are vandalizing the town in seriously expensive ways, and doing serious emotional damage while they're at it. That gets wrapped up in a silly way that doesn't seem fair to the victims at all.

This book tries to be too many things. Any realism that Miller injects into it, such as reaction to trauma and the realities of mental illness, explodes the narrative and leaves the reader with....not a whole lot.