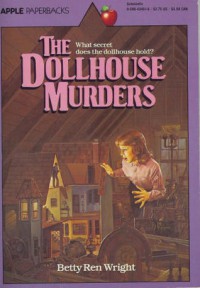 This is one I've wanted to read for a long time. I remember asking my parents to get it for me and their refusing, on the grounds of its being about dolls and having a purple cover. Eventually they realized that it wasn't purple covered books that was making me gay, but that's another story. I found a copy of the 'The Dollhouse Murders' at a book sale the other day and dug right in.

This is a juvenile supernatural tale, but has more going on than one would think. Amy is at that age when its normal to be dissatisfied and embarrassed all the time, but she has some legitimate complaints. Her parents both work and she's often left to look after her sister Louann. Louann has an unspecified disability that often causes conflict when impulsive Louann damages something at the mall or simply takes over the conversation. Amy feels like she can't make any friends. Louann doesn't want to be left behind by her sister. Wright is sympathetic towards Amy's feelings and Louann herself is a prominent character. As much, if not more, of the plot of 'The Dollhouse Murders' is about the sisters redefining their relationship with each other and maturing as it is about solving a ghostly mystery. Unfortunately the back cover doesn't mention Louann at all and no editions of the book even picture her.

The book begins with a mall trip where Amy feels like her chance to make friends with the new girl Ellen is ruined by Louann. She loves her sister, but she feels like her parents are asking too much. After a fight, Amy runs to her Aunt who is staying in the area to clear out an old family property. Amy's aunt Clare has the idea that Amy can stay with her and help clean up the house for sale and give the sisters a break from each other. Amy is thrilled, Louann is hurt and Amy's mother is disappointed, but the plan goes ahead.

It quickly turns out that Ellen is a more understanding person than Amy gave her credit for and that there is something going on in the house. Amy knows her grandparents died many years ago in an accident, but ghostly lights and sounds coming from the dollhouse in the attic tell a different story. Together, Amy, Louann and Ellen uncover family secrets, heal wounds, and grow. This book still has a lot to offer today and a new edition is scheduled to come out this summer. Pre-order it at your local bookstore, not Amazon, and help ensure the book sticks around for a new generation of readers.