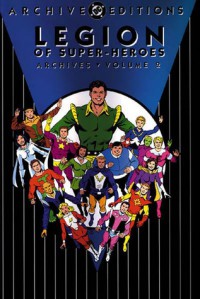 This is 1963 and the silly roots of the 'Legion' are very much in evidence, but I think that sillyness and the emphasis on plot more than action (semi-often fights are not even depicted in one panel, the results are talked about instead) helped mold the comic into what it became. The diverse cast of the Legion of Super-heroes lent it a flexibility that other DC comics didn't have when readers began expecting more sophistication and emotional development from their heroes.

It was slow to come, to be sure, but it happened and the roots of that lie in the death of Lightning Lad and the introduction of Lightning Lass. This proved that the stakes could be high. The readers response is easy to discover as this volume begins with Legion stories taking up only part of that month's "Action Comics", but ends with the Legion being the main and only event in the book.

Members of the Legion, full and honorary, and Substitute Legionnaires, and allies, and villains are so numerous that they don't often have many characteristics. In these issues how much do we really know about founding members Cosmic Boy and Saturn Girl anyway? Not much. But these are important seeds to the series and, more importantly, these stories are just plain fun.