I know you were all waiting for more photos of Ken and Barbie! But first, the book:

The reason to get the Sarah Sink Eames books is simple: her photos are the best. There may be some accessories not pictured or one that is the wrong color, there may be some variations that hadn't been verified yet at publication, but, by using one of the many other options out there to double-check some information, and let's face it people if you are collecting Barbie you are getting ALL the books, the photos in this book are the clearest, biggest and best displayed of any other book I've seen.

Eames was an expert and published at the height of the market, meaning that publishers were willing to invest in a glossy book with superb quality pictures. There will never be another book like this again, I guarantee it. The prices are also tucked away in the back of the book out of sight, which is nice because prices are in such flux these days I would never trust it even if the book was brand new, and now that the book is itself vintage they would only be a distraction.

This book covers the years when the first Barbies were being produced. From 1959 to 1967 there were significant changes to Barbies hair, "makeup" and body while keeping the same head mold. These changes were cosmetic or in response to production flaws. #1 Barbie, for example, had holes in its feet for an 'invisible' doll stand, but drilling the vinyl legs proved too costly. The color in the vinyl was also unstable and the first produced Barbies have all faded to the white complexion seen on the doll on the cover. Cover girl is also wearing one of three outfits that was only produced in 1959. Way out of my league, of course, but a boy can dream. After 1967 Barbie got a new face mold, the original Ken was discontinued as well as the most of the other friends and family to make room for the next generation.

Along with the clear photos of the outfits and accessories and certain other fashion-related sets (pictured here are only those sets that had a unique item of clothing in them so play-sets such as various Dream Houses, Little Theater and Goes to College are not included) Eames does write-ups that attempt to inject humor and storytelling into the hobby. Mileage may vary. My husband appreciated it, it was a little twee for me. Dignity, always dignity in doll collecting.

A basic ponytail Barbie, #5 I believe (c1961), because of her coloring and body, but I'm far from mastering the dating system. The books I've read don't cover those variations in depth, only the fashions. She would have had sunglasses and "pearl" post earrings that if left in would have turned her ears green. You see a lot of that because these dolls were often put away for such long periods, but there's a method to reverse it if the collector wants to take a chance and if the tarnish isn't too deep. 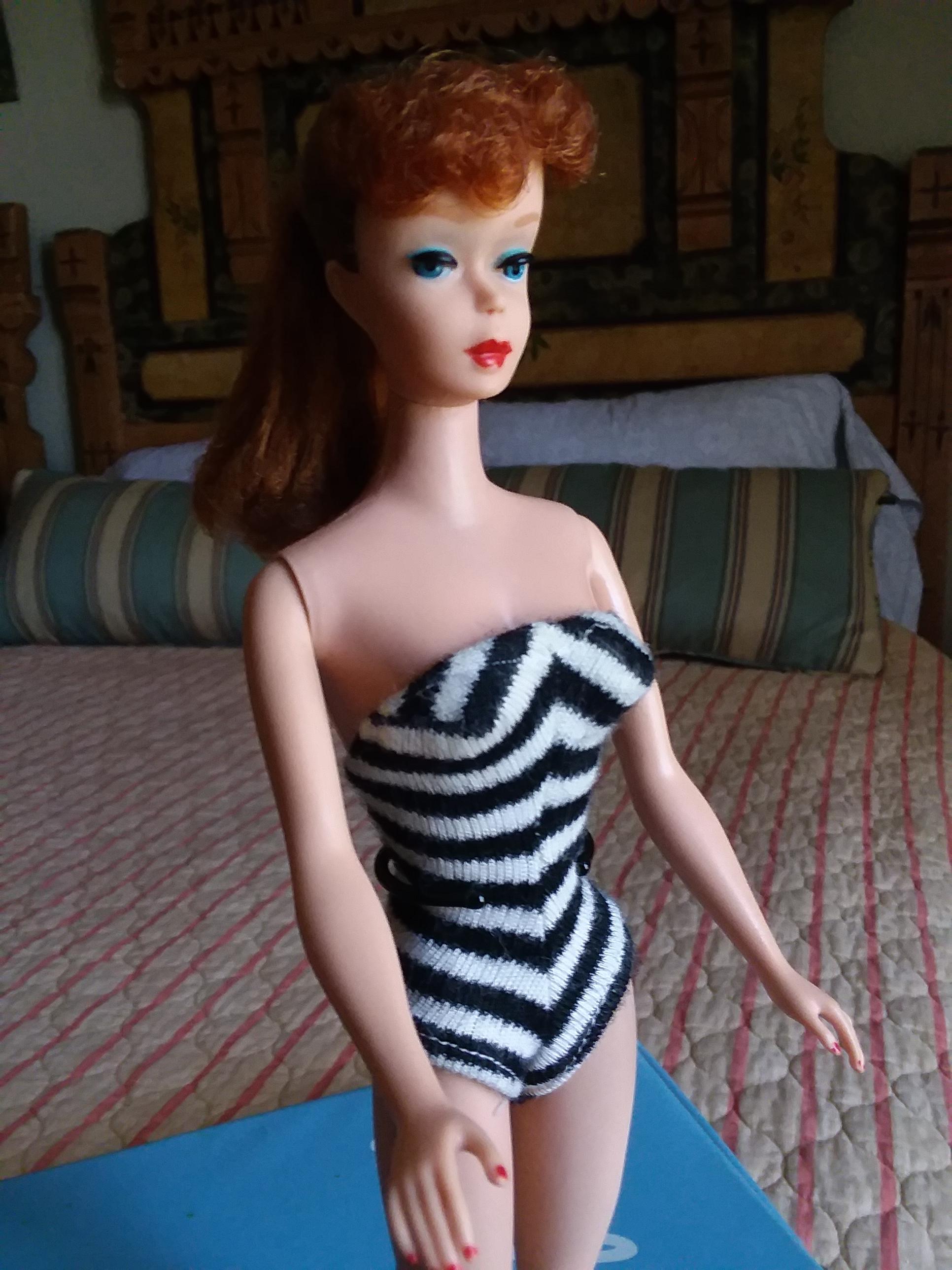 Below is a painted-hair Ken in the plain red jersey suit and a stiff striped jacket. His cork sandals and a borrowed towel (by this time Ken stopped coming with it) are at his feet. This guy is special, too, because he is what is known as a "Shorty" Ken. They are 1/4" shorter than standard because of a different "stockier" body mold. They were produced in the United States in 1963 presumably as an experiment. They were not up to the standards of the Japanese produced dolls, however, and it didn't continue. Thinking about it, I should have done a side by side comparison. Oh well. 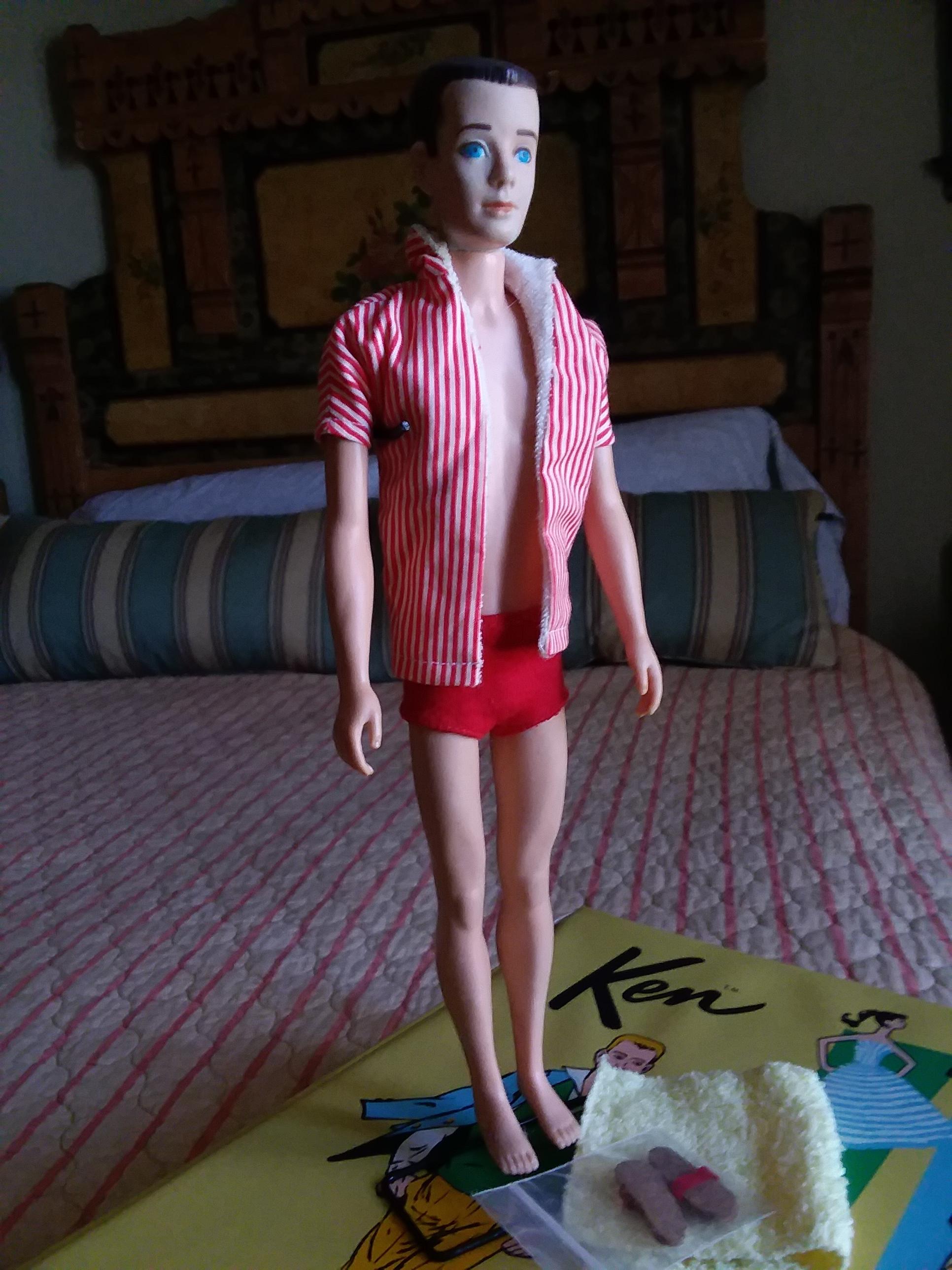 Barbie is great and all, but ever since I learned of their existence I've loved these two. This is Ken's buddy Allan (1964-66) and Barbie's best friend Midge (1963-66) in their original swim suits. Midge came in three different hair colors, each with a different suit combination. 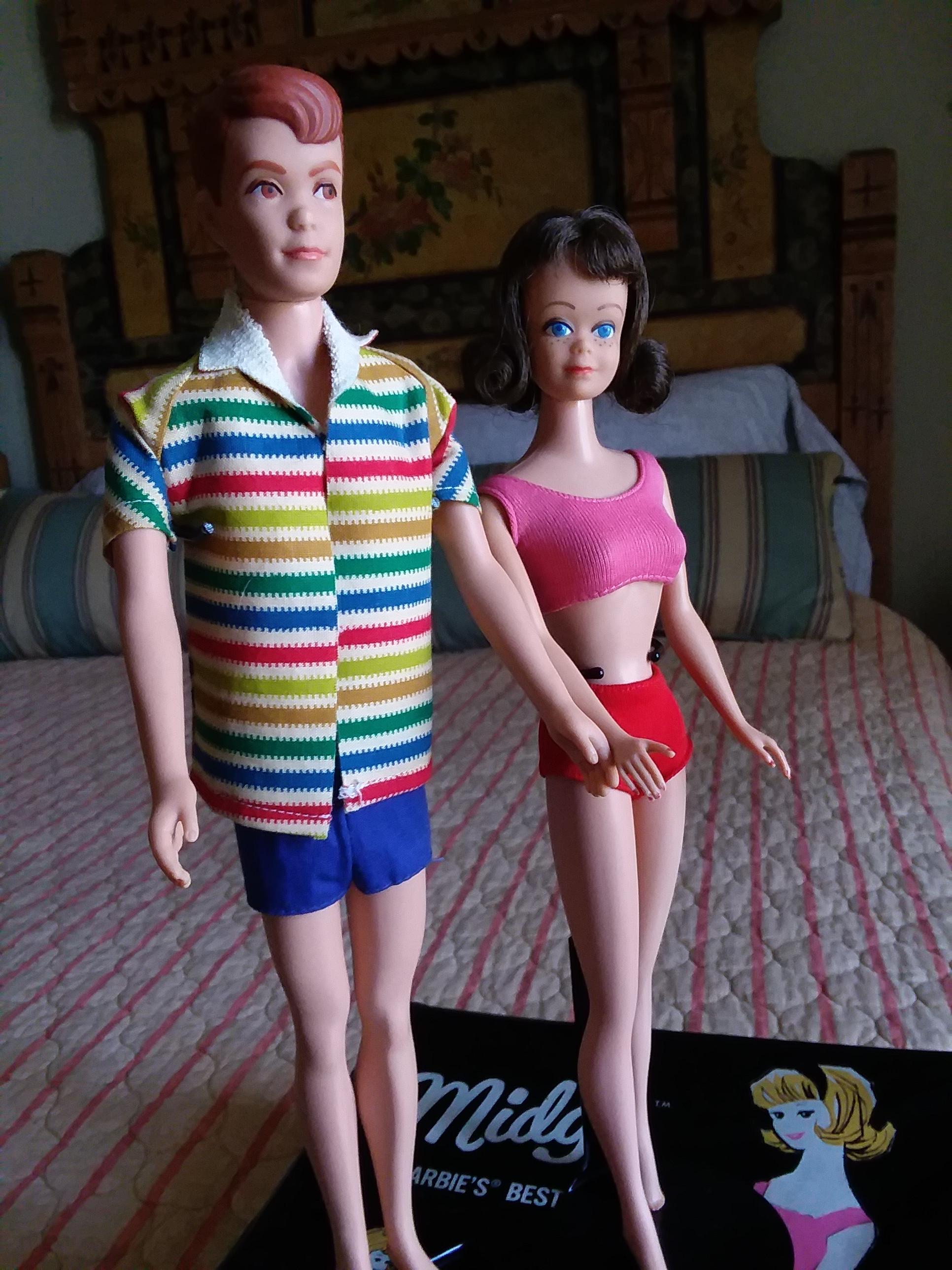 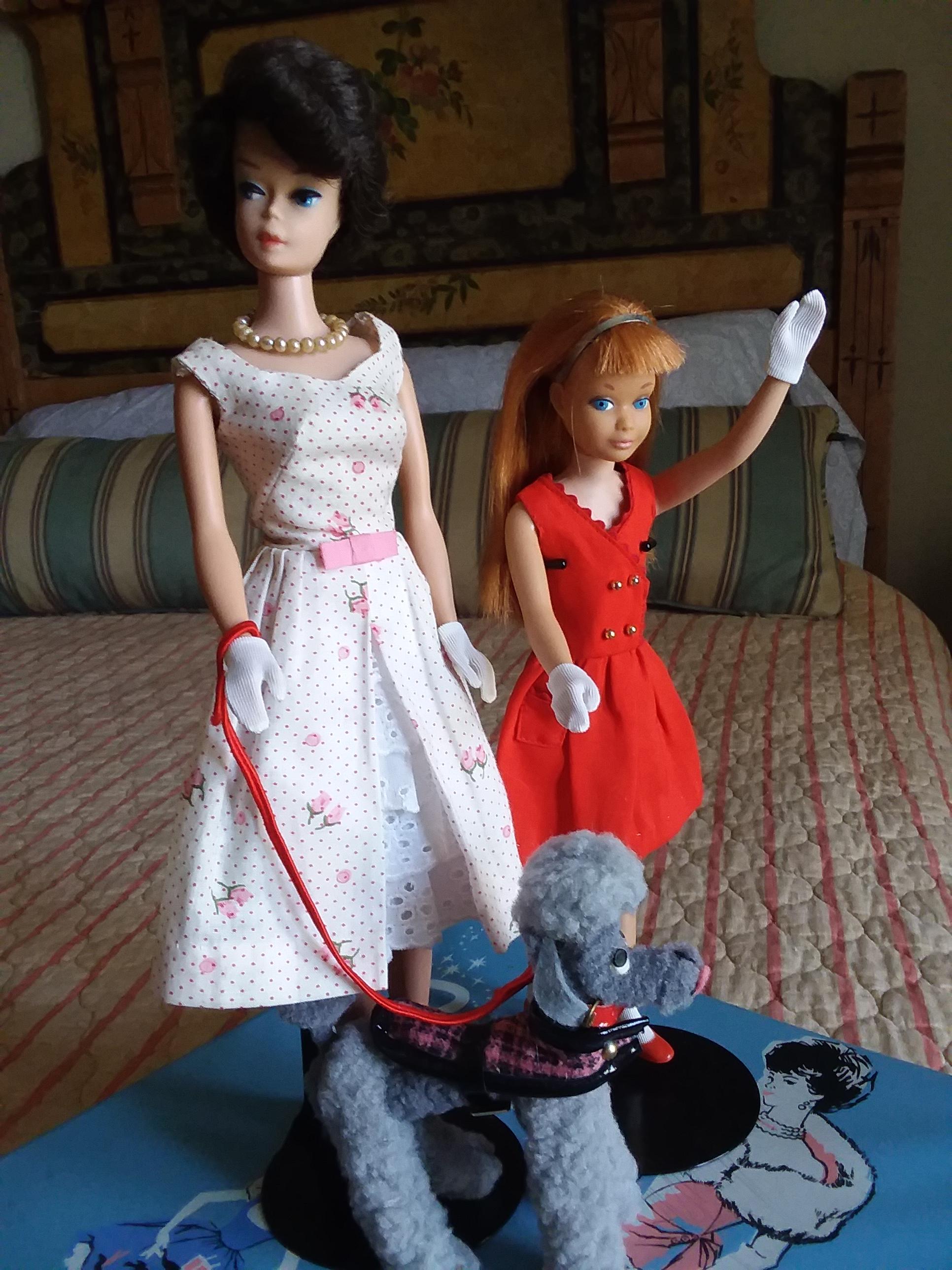 Here's some fun ones. Unfortunately, I don't have any of the Little Theater costumes intact enough to display, but here is a flocked-hair Ken (1961-62) in "Masquerade" (1963-64). I took off the cap and hat so you can see the hair, which is thinning. The flocked hair was discovered to come off when wet or handled roughly, which is why his hair began to be painted.

Though clowns are creepy, it's cool that matching black & yellow outfits were made for Barbie, Skipper and the dog!

The blonde ponytail Barbie (another #5) is dressed up in "Barbie in Holland", part of the travel series of 1964 where Ken and Barbie had matched outfits for various exotic destinations (check out her "wooden" shoes!). 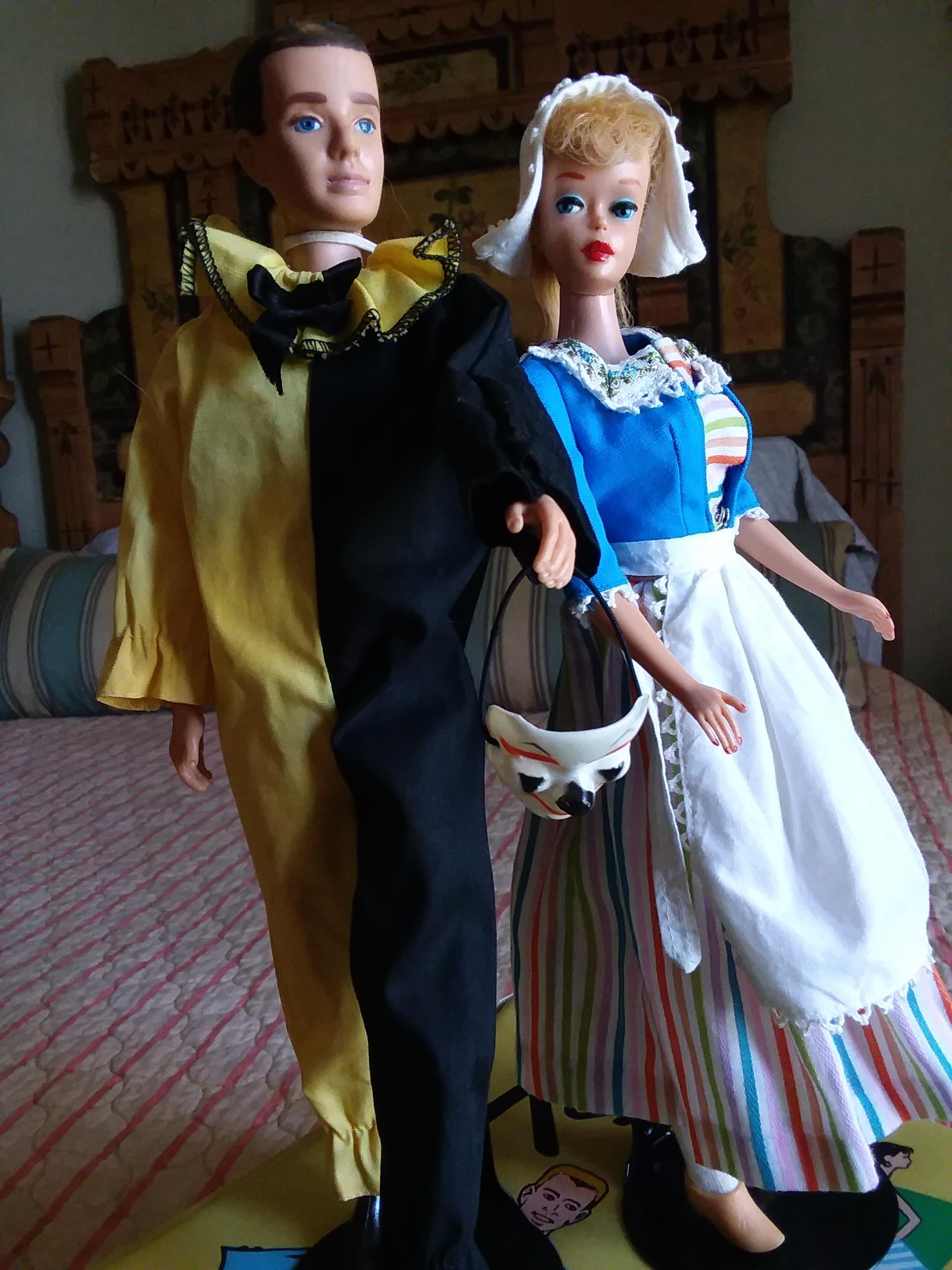 Finally, because early Barbie was all about elegance here's a lemon swirl ponytail Barbie (1964) with a blonde painted hair Ken. He's in his "Tuxedo" (1961-65) with an incorrect black tie (it should match the cummerbund). Barbie is in "Enchanted Evening" (1960-63), but missing her pearl choker and drop earrings. 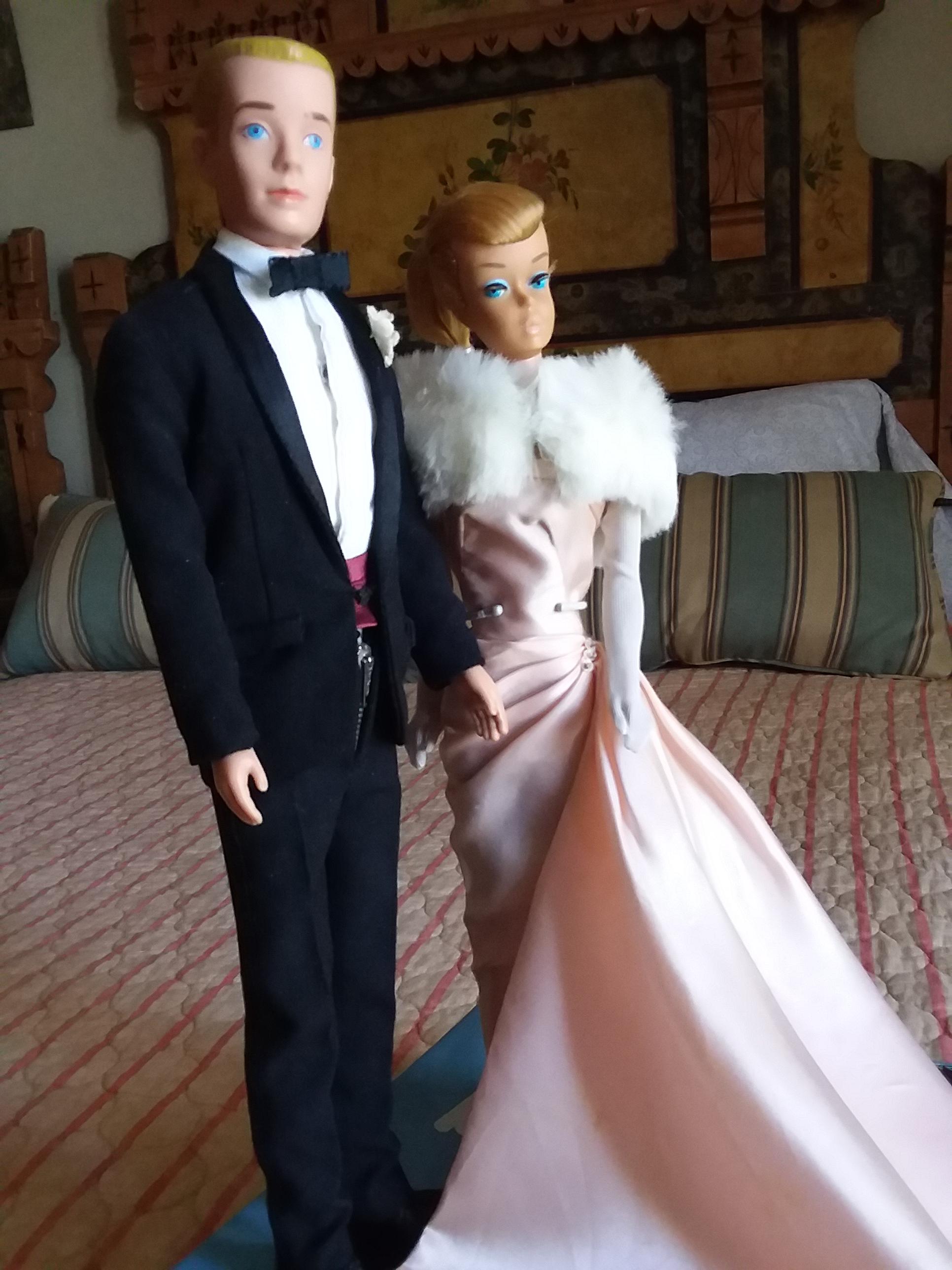 There's a lot going on and I didn't even get into the bend-leg styles. Another time. We have the summer coming up which means it'll be time to hunt the shops some more.

Anyway, back to the book - because of the very few, slight inaccuracies present in the photos I can't say these are the only books you'll need, but I recommend them as valuable supplements to the casual and serious collector who wants a better angle on many sought-after items.