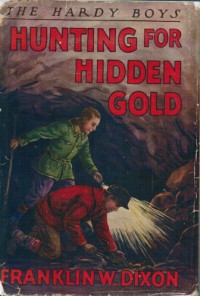 It's a delightful winter Saturday and the Hardy Boys have arranged to meet up with Chet Morton and Biff Hooper for an afternoon of skating. Their talk is about how their father is at a mining camp in Montana called Lucky Bottom looking for missing gold. The boys wish they had a chance at the case, but they have to go to school! The Hardy's friends comment that maybe the boys have had quite enough excitement lately, but enough about that, more excitement approaches. The boys skate all the way up the river to a lake and ignore the signs of an approaching blizzard until they are forced to take shelter beneath a cliff and wait until the storm passes.

The boys are sheltered, but the winds pick up so high there's a sudden crash. A cabin has been blown right off of the cliff and onto the shore of the lake! They investigate and discover an old man hurt, but alive. When the storm is over they'll have to help him into town. The cabin is intact enough that the boys block out the wind, relight the stove (!) and have a good dinner and hear the man tell stories of his days at a prospector, including at a little place called Lucky Bottom....

Coincidentally, when the boys safely bring the prospector to town, they have a telegram from their father ordering them to join him just when they have more information to give him - the high school was severely damaged in the storm so the boys are free to go!

This was a fairly typical Hardy Boys installment, but I went into the whole set-up above just to illustrate how much time was often spent before the mystery/adventure even began in these 20s and 30s stories. Usually, I don't mind, but the idyll where the boys throw snowballs at the buffoon police officer, enjoy the luxury of a Pullman car, and the city of Chicago, only highlighted the lackluster mystery once they got stuck in Montana. Before they even reached Lucky Bottom the boys were put on the wrong train, almost kidnapped, and men were searching every other train for them. There is hidden gold, and the boys hunt for it, but it was never clear to me why the crooks are hanging around and spending so much energy and resources keeping two teens occupied when they could have left with the loot at. any. time.

I did like how cheerfully their dad told them to explore every abandoned mine in the area by themselves, no matter how derelict. Nothing could go wrong there!

There was a significant rewrite done, but I never read that version growing up. The internet tells me it mostly added a spy story-line, additional nicknames, and both versions use amnesia as a plot device. Presumably the rewrite eliminated the black porters and waitstaff from the dining and sleeper cars of the trains.

Next: 'The Shore Road Mystery