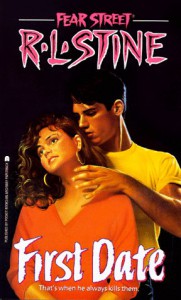 Being a girl on Fear Street is tough, but Chelsea has everything stacked against her. She's the new girl, she plays saxophone, and she's chubby. She's pretty down on herself about it, but maybe that's because everyone from her "best" friend Nina to her mom tell her she only needs "to lose a little weight" to be attractive. There's also a scene later where the killer notices that she's a total slob because the tag on her size 'L' sweatshirt is sticking out. Kill her now, am I right?

Anyway, there's a pretty gruesome scene in the beginning where a heavy make-out session turns creepy and murderous real fast and we find out he's been going from town to town killing girls and Shadyside is his next stop....

The book makes a good effort of making the identity of the killer ambiguous. From the opening scene there are a few clues to his appearance and behavior, but there are two new men in Chelsea's life and they both appear to fit the bill.

First there's Will, the new boy in homeroom, who's muscly arms and shy demeanor win Chelsea over immediately. Her takeaway from their first encounter is that she has a whole day to think of something to say to him. Which...good game Stine, that is crazy enough to be actual teenage behavior.

Next there's Sparks, who shows up at Chelsea's dad's diner where she works. He seems dangerous enough to be cool, aggressively flirts, and Chelsea fantasizes about what it would be like to go out with a bad boy.

Both young men raise a lot of red flags, (WIll likes snow because its "pure", Sparks has a hair-trigger temper) but only one can be the killer! It doesn't mean that either one is really dating material, but as the only other boys in the book are either Chelsea's dad, Nina's boyfriend, or actual nasty kids and/or criminals what choice does she have? Chelsea better wait for college.

A shout-out to continuity was a cameo from Suki Thomas, from 'The Overnight' and others, who was seen talking to Doug, Nina's boyfriend, which only means one thing, because Suki's a big ol' tramp. Stine really gets teens.

The book is legitimately horrible, but that's kind of what makes it fun to read.

Next: 'The Best Friend'