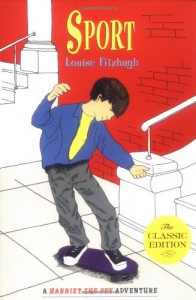 Louise Fitzhugh wrote one of the great classics of children's lit with 'Harriet the Spy' and the neglected sequel 'The Long Summer' has a lot to offer. This book, the third and final book featuring Harriet was published a few years after Fitzhugh's death. I was pleased to get a-hold of this awhile ago, but didn't get around to reading it until I had to go on a trip to the in-laws and only had room (in luggage and itinerary) for a small book.

Unfortunately, 'Sport' is light in plot, character, and charm as well as page count. Simon "Sport" Rocque takes care of his father's finances and the two of them get along alright. Sport is set to start the new school year in public school since the school he shared with Harriet, Beth Ellen, and Janie is girls only after 6th grade. His father introduces him to a new girlfriend, Kate, who is stable and entertaining, and cooks a great steak. Best of all, his father is going to marry Kate so it looks like he'll have two parents in his life again. His mother has little interest in him and spends most of her time in Europe.

Enter the plot. Sport's grandfather, a kind man, is rich and dying. When he passes away it turns out the will leaves most of the money in trust to Sport and a large chunk to his mother if she can take half the responsibility of raising her son.

What follows is ridiculous, so I'm not going into it.

What works in the book are the opening character sketches of Sport's friends Harry, Sherman, and Chi-Chi. If Fitzhugh had been so inclined she could have written a book centered on each of them. Fitzhugh isn't afraid to point out the casual racism of the day in privileged people like Sport's mother and the NYPD. For a book in this age group that's supposed to be funny, it's pretty intense and, even if the book were better quality, would still ensure it being out of print. The fact that 'Sport' was shelved until well after Fitzhugh's death makes me think the manuscript was probably left incomplete sometime in the '60s. It makes me think of what could have been if she'd been so inspired.