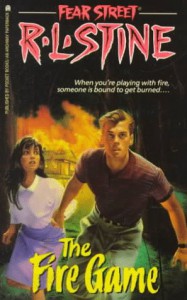 Jill Franks and her best friends Andrea and Diane are in the library alternatively studying geography and admiring Andrea's oversized purple sunglasses with the heart-shaped lenses, when Max and Nick interrupt by goofing around with their disposable lighters, like you do.

Some background: Andrea and Jill have been friends forever, but Diane is new this year, but they've really hit it off on the gymnastics team together, even if she's mousy. Max and Nick are totally in love with Jill and her long dark hair. Probably to impress Jill, Max sets a folder on fire. Dawn freaks out, but Andrea, with short red hair, waves the fire out and throws the folder away.

Next period, there's a fire, and it started in the library waste basket.

They get out of a pop quiz in geography and are ready to impress Diane's old friend Gabe who's just moved to town from Center City. Gabe is hot and all, but he's pretty lame in how he shoots down anything and everything in Shadyside, even when they start talking about all the mysterious death, serial killers, and attackers that have plagued their peers in the last few years. Doesn't faze him one bit.

He's more interested in the fire and he starts daring the other boys to set fires. This, somehow, escalates. The fires get bigger and Jill starts to think that Diane and her "unreasonable" fear of fire might be on to something.

This has an abrupt ending, but fairly satisfying and - unlike the villain - unexpected.