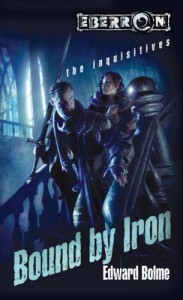 'The Inquisitives' is a series of standalone Eberron novels, much like 'The War-Torn', that share thematic elements. In this case, instead of characters permanently altered by war, we're focusing on mysteries. Inquisitives are the detectives of Eberron, investigating crimes for money or for subtle reasons of their own.

'Bound by Iron' begins with a young girl in Karrnath being extorted by a dwarf claiming to be a member of a legendary troop of fighters. As proof he displays an iron band about his arm. The crime is stopped by an actual veteran of that company, Cimozjen.

Cimozjen is a paladin of Dol Dorn and discovers the arm band belonged to a colleague, Torval, who he thought dead in a battle years previous. With the help of unscrupulous chronicler Minrah (a freelance journalist) he recovers the body and they start an investigation into what happened to Torval after he became a prisoner. This opens up into a conspiracy around other prisoners of war who were never released from custody - against the terms of the treaty ending the Last War. In the investigation they are joined by a warforged who was sold into gladiatorial slavery (warforged are constructs created for battle, but by the terms of the Treaty of Thronehold they were acknowledged as free persons) and must adjust to a life outside of the arena.

The book periodically flashes back to Cimozjen's activities in the war, his bond with his fellow soldiers, and especially his friendship with Torval and why the paladin would risk so much to discover what happened.

Bolme is a good writer, his 'Orb of Xoriat' was very good too, he provides a lot of action, convincing fight scenes, and understands the character of the world he's writing in. I really liked his treatment of Cimozjen as the old veteran seeking justice and his dynamic with the naïve warforged Fighter/Four was always charming. However, particularly with the character of Minrah, there were some big problems with the novel as a whole. Minrah is young in years for an elf, but despite her brilliance of observation she wasn't very useful or interesting, tending to flee from confrontation or huddle behind the others. The book also ends in an abrupt way - tying up most loose ends to be sure - but not in a way that makes me satisfied. This is the only appearance of Cimozjen and the warforged known as Four and that's too bad.

There is a lot going on in Eberron, but its steam-punk, noir aesthetic is what really sets it apart from other campaign settings like 'Forgotten Realms' or 'Dragonlance'. I liked the idea of a series that might evoke noir classics from Raymond Chandler or Dashiell Hammett. It's not a genre I've read much of - those two authors are pretty much it - but I'm hoping for some more of that flavor once we get into Halloween Bingo.

Next: 'Night of Long Shadows'