Forge of the Mindslayers, Blade of the Flame #2 by Tim Waggoner 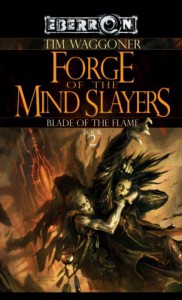 Some months after the events of 'Thieves of Blood' the remaining party members led by Diran take are on an aggressive campaign against evil. Their travels have led them across the Principalities into an obscure corner where two small baronies locked in a trade stalemate, an old curse prevents cooperation.

In the mountains they cross paths with the lich Lathifa in her lair, and she is fascinated by the dragonwand the artificer Tressler carries. It was apparently fashioned from a powerful and lost magical artifact. The lich sends her barghest servant after the party to get the wand at any cost. In those same mountains an orc rival of Ghaji is working for a mad assassin from Diran's past and a Kalashtar. The terrible trio are working to rebuild an abandoned experimental Cannith forge.

There are a lot of coincidences going on, but a lot of it can be explained as the manipulations of Vol, who, admittedly, has had 3,000 years or so to line things up. In the shadow of her plans the struggle for the psi-forged facility pales. Waggoner continues to dig deep into the character's pasts with well-timed flashbacks and broadens the character's relationships with each other. The villains are hardly bungling, but there was something funny about how these five scheming villains could hardly stop plotting and backstabbing and rubbing their hands together to get REVENGE and be the BEST at being EVIL!

This was really enjoyable - I had to dive right in to the next one.

Next: 'Sea of Death'