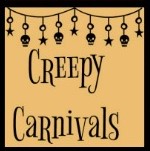 Creepy Carnivals Square: Well, duh, but OK: a carnival returns to a town over 30 years after it was torched by a mob, ready for revenge.

In the town of Holland, Nebraska the Carnival is back in town. Some thirty-odd years before there had been an ugly incident where an angry mob, incensed by the rape of two young girls, burns a carnival - and all those who worked in it - to the ground. Something like over a hundred people died, but it was quickly swept under the rug by the authorities at the behest of some mighty rich ranchers. In reality it was the sons of two ranchers who were the rapists, and nearly everyone in the town apparently helped murder all the carnies and animals. As a community, they decided to not talk of that unpleasantness and moved on, except for the occasional hand in helping a rapist get away with it again.

So, that's fucked up.

Martin Holland IV is mayor of Holland, like his father and grandfather before him. This isn't a problem. The town and surrounding ranch land is isolated in one of the most depopulated counties in the country. Martin is an every-man millionaire and ass-kicking machine with a trunk full of medals from Vietnam. He prefers to not talk about all that and lets other townspeople remind us of that. Frequently. Something weird is going on in town. He has disturbing visions when he sees the carnival trucks driving in, he doesn't recall signing the permit allowing the carnival into town in the first place, hundreds are drawn to staring blankly at the fairgrounds, oblivious to anything else, and some other folks are winding up dead. Cooked from the inside. It's quickly apparent that some evil shit is going down.

So Martin does what any rational rich guy would do, he makes a protective huddle with his rich friends and their kids and passes judgement on everyone else.

The undead revenge-carnival activates the latent evil in about 10% of the population and brainwashes the majority of the ~5,000 people of the town. They are cut off from the outside world, and even though they have a week to prepare ANY OTHER contingency plan the small group of spared souls/Christians elect to GO TO THE EVIL CARNIVAL AND SEE WHAT HAPPENS.

I'm sorry for shouting, but at no point do these people make a good decision. They bring the 8 year old. I mean, come on.

An important part of the "mythos" of this book, and perhaps of the nebulous dozen or so horror novels in the 'Devil' series, is that the devil has people planted all over Earth, soulless (maybe) demons, who go through life perhaps not knowing what they are until they die and go back to hell or something. As townsfolk, close friends, and family members are revealed to be demons, or otherwise coerced into evil - even when they are clearly impaired by some kind of mind control - they become fair game for murder by the dozen Christians trapped in the carnival. They made their choice, you know. They didn't live by the Word. Only rich white people and chosen servants do that.

The final chunk of the novel is devoted to the evil carny king trying, not that hard to be honest, to win over these Christians because they are much more valuable to Satan than the thousands of other people brainwashed to be evil. He mostly just threatens them and laughs.

I don't know what to make of this book. I expect heavy misogyny from these books, so the criticism of whorish girls not worth trying to save and long conversations interrupted by women offering to make sandwiches amused me more than anything. It was the more heavy-handed scenes such as when our hero slaps a man, and spends half of a precious day bringing that man back to good, while the underage naked girl the man, worth saving, was having sex with is told to get out. Even loved ones, when revealed to be demons, are dispassionately cut down. Some of our intrepid band of Christians get cut down as well, but it was hard to tell characters apart, so, it didn't hurt too much.

The ending adds to the stupidity. I don't know what you should do when you know that 10% of people are evil in the flesh, but I wouldn't spank them and make them go to church.

This was demented and funny, but I can't recommend this to anyone.