Into the Pit by Warner Lee 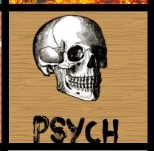 Psych Square: Jason's first wife Glenda's psychosis drives her to terrorize him and his new family from beyond the grave.

This is not a sensitive portrait of mental illness. It is in many ways a guide of what NOT to do if a loved one begins showing signs of mental instability. The novel has two timelines, present-day (1988) Appleton Falls, NJ and the other in various locations in the 1970s, ending in Philadelphia.

It begins with a young psychic, Jennifer, who makes her living drawing up astrological charts and reading tarot cards agreeing to do a seance for a client against her better judgement. The seance is a success, but it opens a scary door. After, Jennifer is plagued with green mist and visions of fire and she keeps blacking out and finding she's recorded herself asking for Jason McGuire.

Jason McGuire is a landscape architect. He and his wife have finally established their business to the point where they're getting high-profile clients and can enjoy their new family. Nyssa is taking time off until their son is ready for nursery school and everything is perfect. Until he starts having nightmares about his first wife Glenda. Who he loved so much until she "denied him" children, went mad and was a pain in the ass. The book says a torment, but mostly she seemed inconvenient, until the Satanism. She died in a house-fire years ago.

The book shifts viewpoints to a group of misfit boys obsessed with their shameful virginity. One, Christopher, offers to show them the body of a hot woman as soon as one shows up in his father's funeral home. The boys think that will be delightful. Glenda, off in the green mists of hell or whatever, finds a way to sneak into the world through the funeral home, too, and starts making mischief.

There are some genuinely scary scenes, some possession, some kidnapping, but the pace seemed a little off and there was a brief plot fake-out that wasn't believable for a second. Mostly, I was distracted by how Jason lived for years with his wife in an obviously unhealthy state, not even telling her parents. Years pass even after she gets involved with a cult and Jason witnesses their weird sex rituals.

My experience with mental illness is slight, but if someone is behaving as erratically and violently as Glenda does, I wouldn't wait eight years to think about just talking to a doctor against her wishes and I don't think anyone else would either.