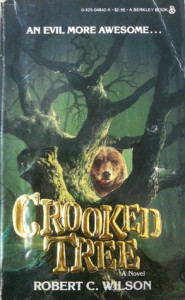 In the Dark, Dark Woods Square: The Crooked Tree State Forest has suddenly become plagued with black bear attacks with a sinister origin.

Axel Michaelson is working on an injunction to prevent development of part of the Crooked Tree State Forest in the lower peninsula of Michigan. The housing development would provide jobs to the area, but, he believes, would irreparably harm the forest and negatively impact the Ottawa Native Americans who still live in the county in great numbers.

His wife Janis is descended from an Ottawa chieftain and begins acting strangely. The dogs in her kennel begin barking at her and she has memory loss and mood-swings.

A series of people make plans to enter the forest and their characters are developed well enough that their grisly - almost a pun! - fate is all the more shocking. Wilson writes extensively about the natural habits of black bears so the reader gets a sense of how unusual the violent behavior is. The novel is influenced enough by 'Jaws' that Wilson felt readers should understand what actual animal behavior is like. The supernatural origin of the bear attacks may dull the scares for some.

I'm unfamiliar with Native American history in Michigan so there were some interesting information here. My favorite bit is when Axel goes researching a particular Ottawa ritual and engages in some serious reference-library porn. From a citation in a dusty treatise he seeks out the source material at the University of Michigan library and, with the help of a library assistant, tracks down an obscure archive with the use of many reference manuals and card-catalogs. It goes on for a couple pages, it's totally dated, and totally thrilling. Research used to be so very, very hard. People should remember that.

That bit of reference-porn makes up for some very silly dramatics involving ghostly possession and naked woods-wandering. The book almost made it as a serious horror novel, but it was still a lot of fun when it went off the rails. The cover on the mass market was diecut so the bloody-mouthed bear of the cover is revealed to have the body of a sexy, hairy woman humping the body of a man while she pulls his heart out of his chest. So I was pleasantly shocked at how good much of the writing was.