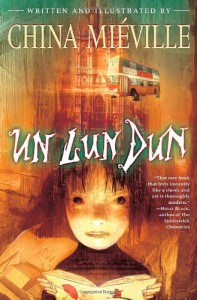 Darkest London Square: Deeba and Zanna discover a whole new side of the city.

'Un Lun Dun' starts promising, but it overstayed it's welcome. It had an old-fashioned, episodic nature to it, much like 'The Wizard of Oz' or 'Alice's Adventures in Wonderland'. Deeba and Zanna are drawn by circumstances to UnLondon, a bizarre reflection of London that holds most everything that was discarded from that city. There are many such 'abcities' that have a symbiotic relationship with each other.

UnLondon is under threat by the Smog, pollution incarnate, and all the prophecies point towards Zanna being the chosen one, the Schwazzy, and therefore the only person who can save UnLondon and perhaps all the worlds from disaster. And then something goes wrong....

This book is full of odd meta-detail and story deconstruction. It's fascinating the way Mieville subverts expectations of what Destiny means, the nature of the heroic quest, and other tropes get thrown into a blender. That is supposed to be fascinating for me, but after a few hundred pages I just wanted it to be over. There were even a few bits of genuine horror thrown in with no apologies, but it wasn't enough. At least there were lots of disturbing illustrations.

Poor book. I didn't give your second half the attention it deserved.