Francie and her Mod, Mod, Mod World of Fashion by Joe Blitman I've been looking and looking for this! Francie, Barbie's "MOD'ern" cousin, debuted in 1966. She can be elusive, but irresistible once you get a handle on what you're looking for. Joe Blitman's other book 'Barbie and her Mod, Mod, Mod World of Fashion' was a comprehensive and fun look at the 'mod' fashions for Barbie and her same-size friends. His book on 'Francie' is just as thorough and playful. It includes every Francie doll and outfit produced. 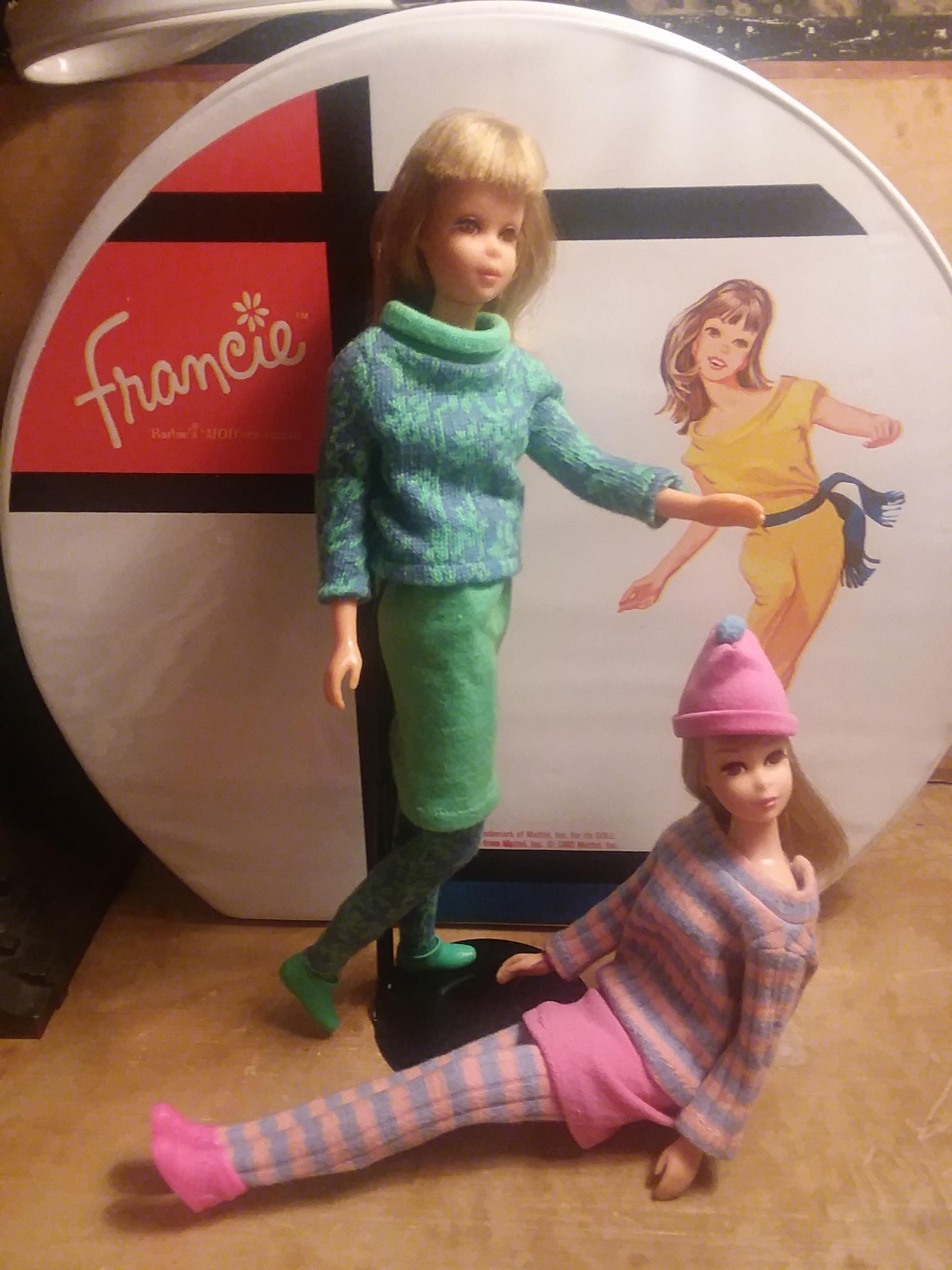 In addition to a section covering dolls in their original packaging and outfits, the book offers two photos of each outfit, one neatly laid out with its accessories and another on a doll, or dolls, in posed shots with fun props and backgrounds. This makes for a more interesting read and it also offers different angles and textures that aren't easy to see when they're lying flat or still beneath plastic. This is especially true of the knit or crocheted leggings which are very hard make out in those small pictures. 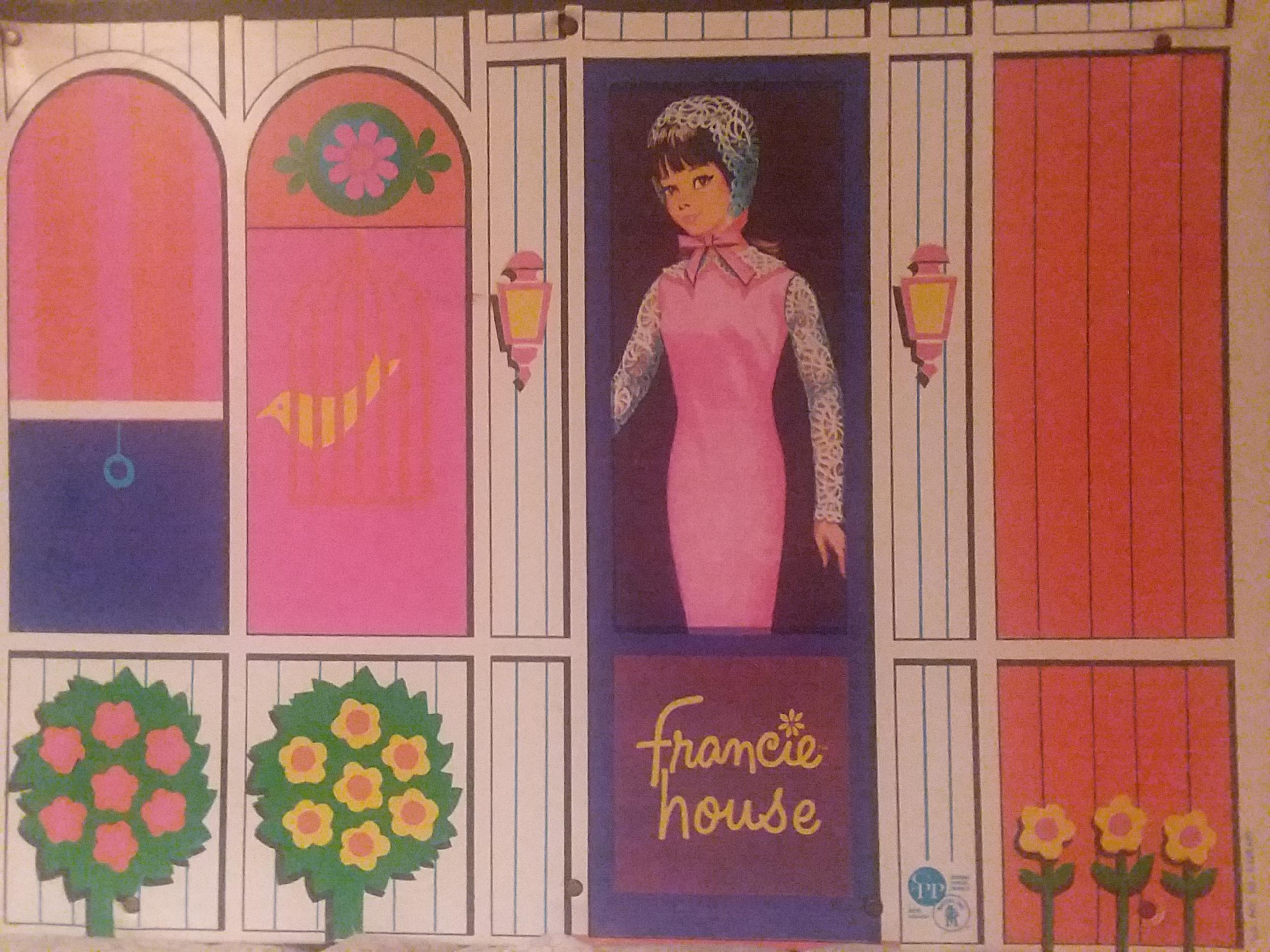 Our latest find! The 1966 Francie house. It's an enormous vinyl suitcase. I can't imagine a kid lugging this around full of dolls. It's missing some pieces, as you'll see, but I put in some extras.

Francie in various forms was around for roughly ten years depending on how fast stores sold old stock. She had same-size friends in Casey and Twiggy (they shared a head mold). She never talked, but was given a Malibu make-over (a differently painted Casey head) in 1971. Her outfits then became less inspired as the '70s wore on before she was discontinued sometime in 1976. 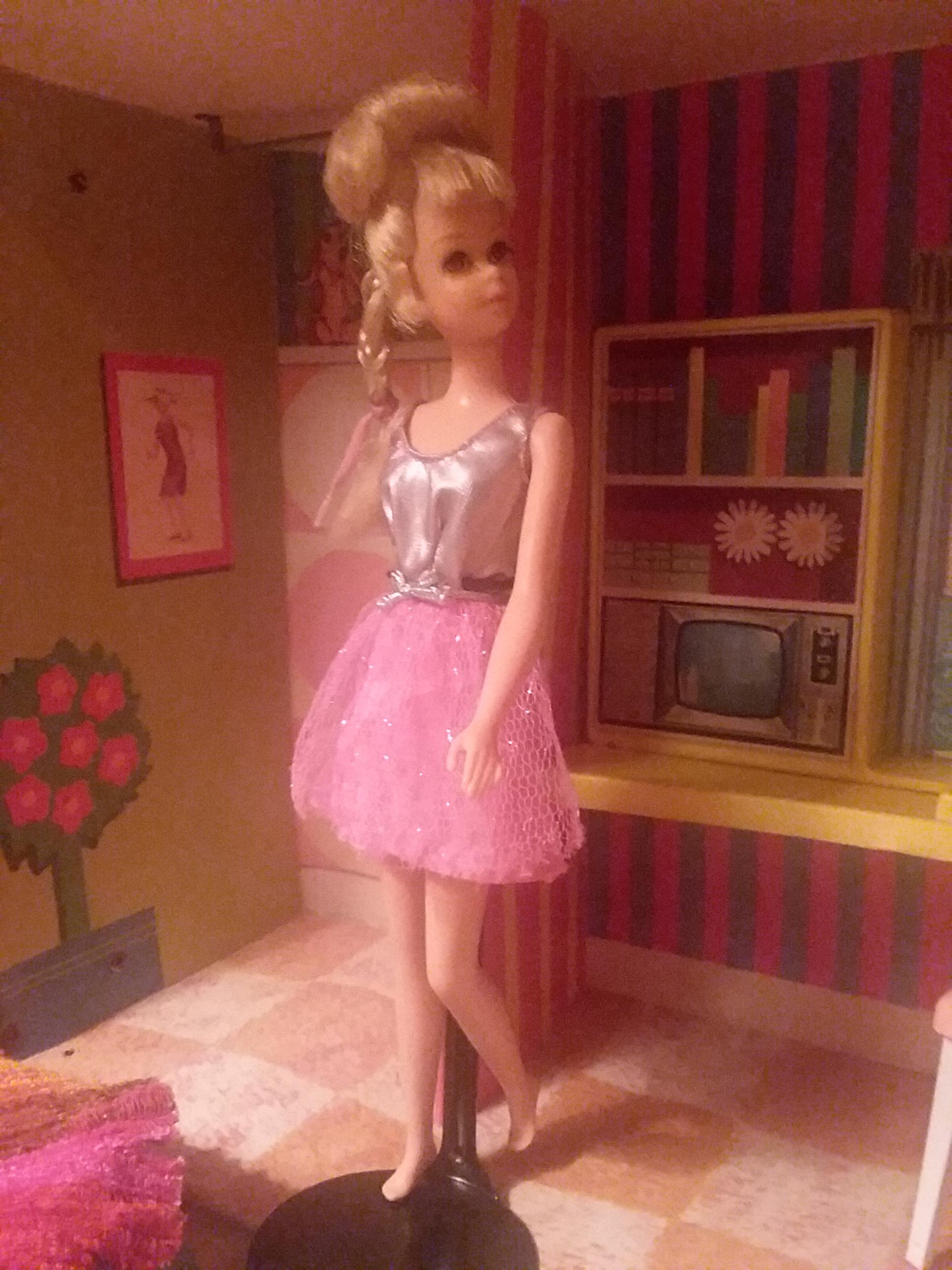 A 1970-73 Francie with Growin' Pretty Hair in her original dress. The mechanism for the hair seems to be frozen. I'm not going to be the one to yank her head off trying to make the hair 'grow'.

Francie only ever came in blonde or brunette (the growin' pretties were only blonde, the quick curls were only brunette), but was the first doll to have the 'real' eyelashes enjoyed by many of the dolls of the late '60s and early '70s. In another first, Mattel released Francie as a black doll in 1967. This version is extremely scarce, but available online if a collector wants to pay. Another problem with finding any Francie in good condition is that in the 1965-69 years the vinyl has a tendency to yellow and/or develop a sticky residue. 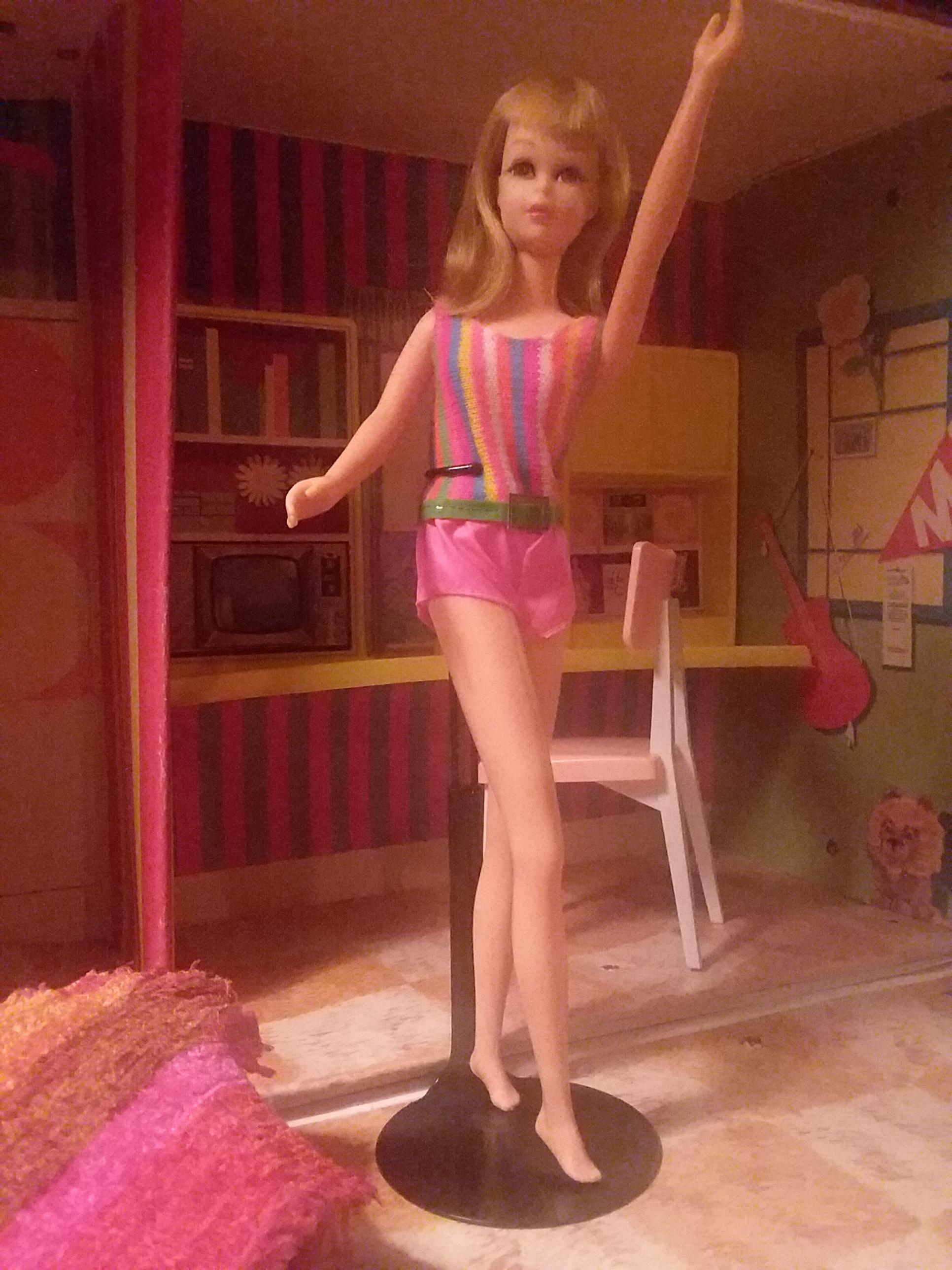 We've made some progress collecting mod-era dolls, but we have a long way to go. With a few exceptions, we won't pick up anything after 'Malibu' happened. I didn't have many mod dolls before, so I've mixed a few of them in the last photo. :) 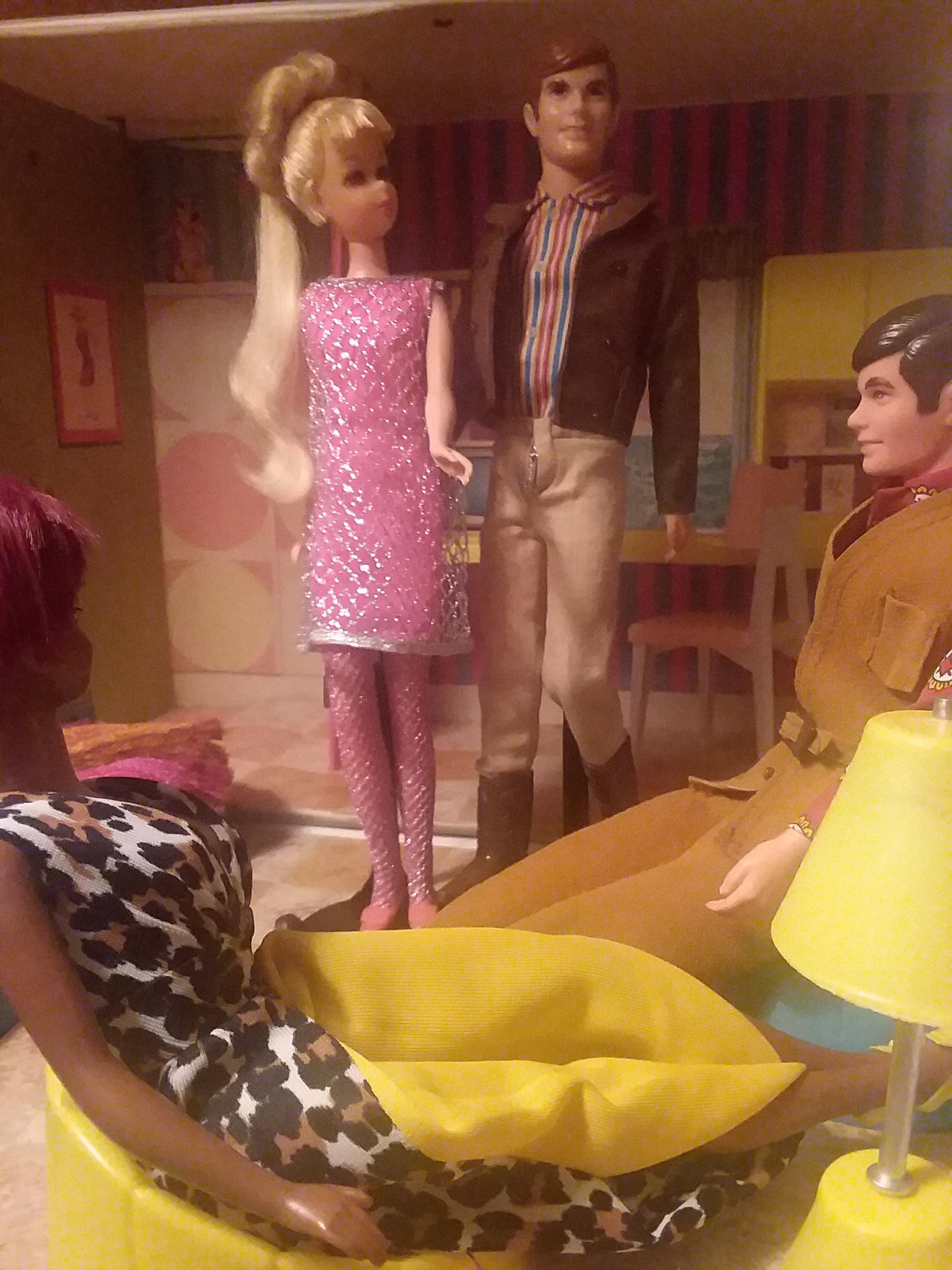 Party time! Another Growin' Pretty Francie wears 1968's 'The Silver Cage' escorted by a New Good Looking Ken wearing 1969's 'Rally Gear'. A Free Movin' Ken is in 1971's 'The Suede Scene' and a Twist n' Turn Julia wears 'Leisure Leopard'. By the way, those chairs are mounted in the vinyl and can swivel. Probably so a child (or grown ass man) could swivel the dolls underneath the table top (missing).