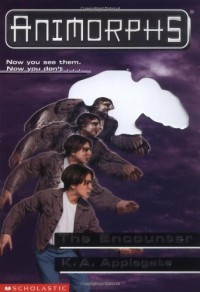 When an Animorph takes on an animal's form they take on that animal's instincts as well, meaning that it is a battle of wills to maintain control over the animal body and there's always the chance that the animal will win out, if only for a moment, and put a mission in jeopardy. There's an interesting parallel between the Animorph's 'acquisition' of animal dna and transforming into them and having to subdue the natural mind, and the Yeerk's possession of an intelligent creature and enslaving their mind.

Tobias stayed too long in his red-tailed hawk morph during the Animorph's first confrontation with the Yeerk's and is therefore trapped forever in that body. Telling a story from his perspective means the focus is on his constant struggle between his humanity and his hawk-mind. How does he remain human when it feels like his human memories are already drifting away?

Without the constraints of school or other family responsibilities - Tobias is an orphan and his indifferent guardians each currently believe that Tobias is off visiting the other - so he is free to explore and discover any suspicious behavior that may point to Yeerk activity. He witnesses an unusual pattern in the sky that turns out to be cloaked Yeerk spacecraft. The group decides to investigate.

There have been a few times when the Animorphs have revealed themselves in public in silly ways, but Tobias and Rachel's prank on a used car dealer in the beginning of this book was caught on live TV and should come back to haunt them. Additionally, its been three books and nothing has been said about the woman they rescued from the Yeerk Pool - shouldn't this woman be an ally? Can she provide information about the aliens from the inside since she was a host for at least SOME period? The continuity of these books is pretty tight so I'll keep paying attention.