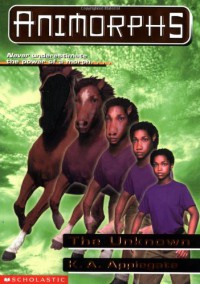 Another Cassie book, another low rating. It's not Cassie's fault - its just this plot had little going for it.

A woman named Crazy Helen has reported some odd behavior in the local wild horses to Cassie's dad.

Sidebar: OK, where in the country are these people? They're in a city big enough to have a few skyscrapers, major television stations, a theme park/zoo, malls, as well as seashore, virgin forest, mountain ranges, arid lands, and wild horses now? All a 'morph away with time to be home by dinner? Come on Applegate.)

I don't know why that is so important now. I should be more puzzled by the lack of video surveillance anywhere.

Where was I? Right. Wild horses. The wild horses were acting strange according to Crazy Helen so Cassie and her dad went to check it out with Rachel along for the ride. The horses were bizarre.

The strange horses have an interest in 'Area 91', an Air Force base in the heart of the Dry Lands where rumors of UFOs have attracted scrutiny in the past. Obviously, the Animorphs need to check this out.

The Animorphs, even the Andalite one, are kids, so their plans can be a little patchy. I have serious objections to the Yeerk plans at the government facility and later in the House of Horrors at the theme park (don't ask). What is this? The one point of humor relates to the 'secret' at the heart of Area 51, I mean 91.