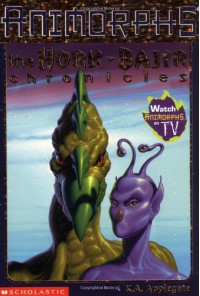 This gives a lot of breadth to the Animorphs series. The weakness of the series is the 'heist' format that dictates a certain structure/resolution to each 160 page adventure and leaves a lot of the world building to one block at a time. The characterization is decent, but often Applegate must resort to a show not tell style. A few titles have stood out above that structure. This is different. This is really good.

Tobias has a few days free, there being no missions, and decides to visit the hidden valley where the free Hork-Bajir Jara Hamee and Ket Halpak live. Tobias is pleased to see a child has been born and that others have joined them.

In the meantime, the sun has gone down, and without thermals to life him out of the valley, Tobias must spend the night. The Hork-Bajir suggest stories and Jara Hamee decides to tell his father's father's story about the war between the Yeerks and the Hork-Bajir, and the Andalite's involvement.

The story centers on three perspectives: an Andalite named Aldrea, the daughter of Prince Seerow who introduced the Yeerks to the stars; Dak Hamee, a 'different' Hork-Bajir, one they call a seer, who can teach the tribes new ways of doing things; and a Yeerk named Esplin 9466, who decides his path to power is through study of Andalite culture and technology.

This is a first contact story and in many ways can stand apart from the whole series and be read in that vein. Readers know how the war will end, but the story is an important one and is told with a lot more nuance then is typically seen.