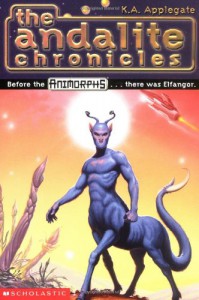 'The Andalite Chronicles' not only gives greater information about the universe beyond Earth, but it provides a real opportunity for Applegate to show off her narrative skills. She really can write. The book was originally divided into three parts and distributed through Scholastic Book Fairs, but they tie together seamlessly.

My only quibble with the book would be that young Elfangor sounds too much like an Earth teen. When Ax was introduced he had none of the mannerisms that Elfangor and Arbron share.

So, I read this after 'The Pretender', because I was told that there was a major spoiler for that book even though it was published a year after 'Chronicles'. Fandom has mixed feelings about this, but enough agreed for me to go along with it.

It's hogwash people. There is a "spoiler", but it really doesn't affect the storyline or impair the enjoyment of the books. It just goes to show, publication order is always the only order to read a series. Always.

In other news, this was amazing. I can't believe I'd forgotten every bit of it, the only part that sparked recognition, except maybe the jokes about cigarette ads.