First things first: the book is out of date, of course. The book is still worth looking at for two reasons: 1. it is a concise account of Mattel's early history with an understandable emphasis on Barbie including information gained by interviews with Ruth Handler and many influential, longtime employees; and 2. as a snapshot of collecting as it approached it's late '90s zenith before the internet brought the roof down.

I'd never read any long-form review of Mattel's history so that was entertaining, but it was the attitudes of ~1994~ that really kept me in the book. The book is divided into chapters from the history and the biography of the company and Ruth Handler to chapters on the Japanese factories, to quality control, and spotlights on fashion, shoes, and characters. The book is a mine of information on the early period, but Westenhouser sporadically covers the late '70s, '80s and early '90s as well, particularly the beginning of collector-exclusives and her bizarre obsession with the Steffie face. 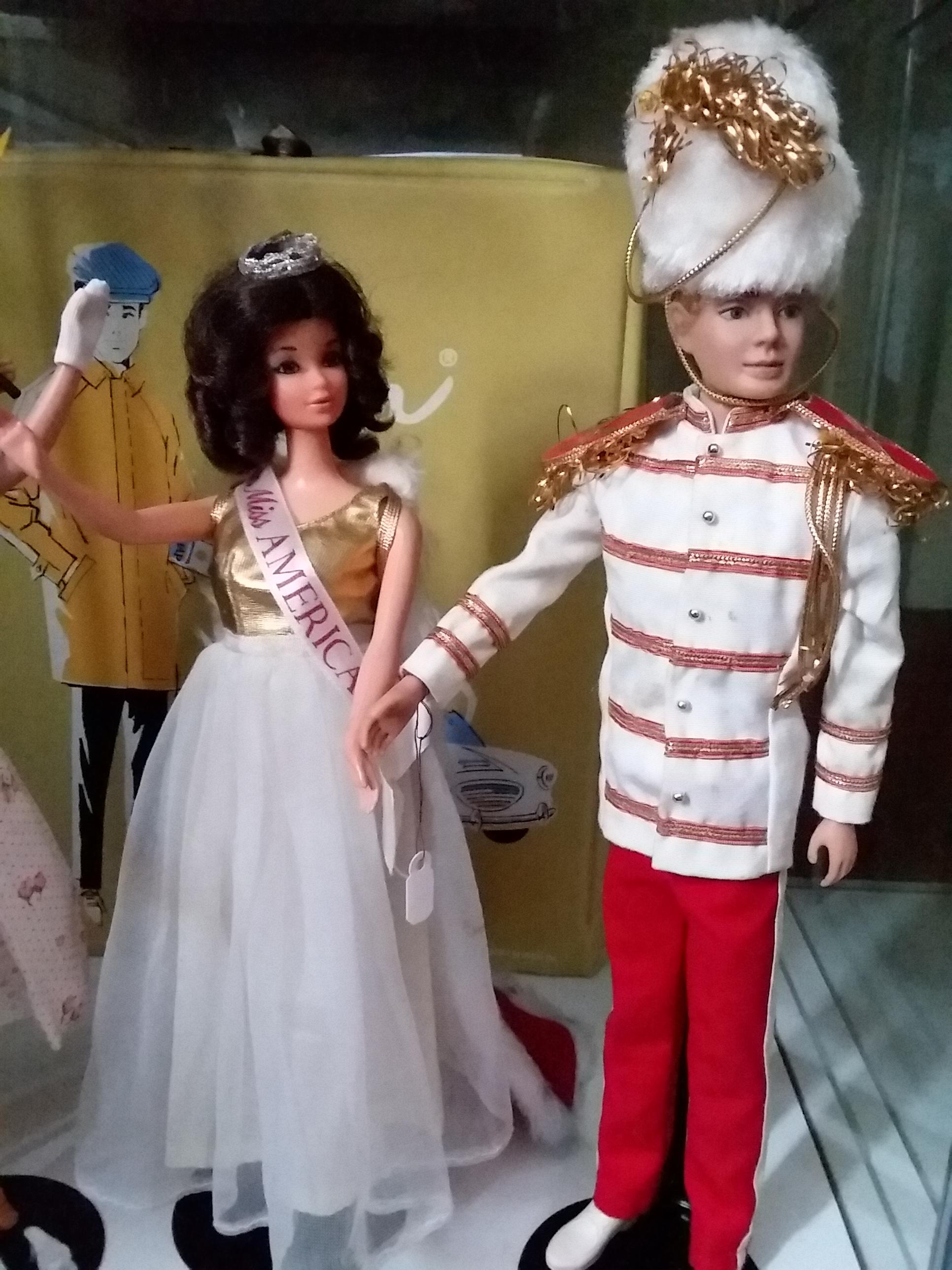 The famous Steffie face, serving as the face of the Miss America doll from 1972. Next to her is a #775 Drum Major Ken

I had to laugh when she gave Barbie's toddler siblings Tutti and Todd a chapter, but Francie got relegated to 'other friends'. I quote: "...some collectors claim to prefer Francie...." as if they must be lying. She also called Twiggy "shapeless". It was kind of hostile and really stuck out compared to the fawning profiles she gave of other Mattel products, including 'Crystal Ken' and 'Totally Hair Barbie'.

At times she would really wax poetic when talking about the great things Barbie is doing in areas once blocked by the iron curtain or the breathtaking beauty of the Whitney doll (which had a Steffie face, obvie).

The best pieces of information came in the the myth-busting the interviews with Mattel employees supplied. Most of this information is common in newer books on the subject or, of course, on the internet. But collectors for years would have struggled with identifying legitimate variations in dolls and clothes versus accidental 'Frankenstein' Barbies caused by head-swapping play, or even dealer fraud.

Mattel was a business and they were making toys. Quality control was top-notch in the first decade of production, but they were not wasteful. If an improvement was made to the mold of a limb or face, if their were leftover accessories, or if colors of hair ran out, and orders needed to be filled, the factories used old stock that was lying around. There were also whole series of 'pak' clothing items designed to use up leftover fabric from discontinued designs.

The first wave of African American dolls made by Mattel for the Barbie line were a version of Francie followed by Christie and Julia. Their hair often turns up a vivid shade of red instead of black, because of oxidation. I thought it was a failure of the saran fiber, but it was actually because these dolls used leftover Color Magic 'Midnight' hair. Time and contact with an acidic environment turned the hair from black to red. I'm totally going to experiment on turning my dolls hair back to black.

There's also a lot of time spent talking about the technical achievements of making the doll in the first place and then altering the design for bending legs, rotating joints, "winking action", and other milestones, while keeping the doll's proportions intact. There was a nice section on prototype dolls and outfits, again, providing some support for collectors who are interested in acquiring such things and how to spot fraud.

The only real disappointment I had was an omission in her chapter on the cardboard play structures for Barbie from the mid 1960s. There's no mention of the brilliant 'Skipper Schoolhouse', though she mentions at length the creativity of the other structures. I don't own any yet, except for the first Dream House which was a very simple design, but the later structures created this multi-dimensional world with walls, pass-throughs, sliding doors and even theater curtains, while still remaining a toy that folded flat AND held tiny accessories safely. That's some great paper engineering. The 'School House' featured a classroom and playground with 'working' swings, slide and monkey bars, and I doubt many survived.

There was also no mention made of the vinyl/plastic houses that started being produced in '66. This stands out because she talks a lot about dolls up to the 1993, so it seems like a deliberate snub.

This is a good book for someone wanting more of a grasp on Barbie's history and cultural context. It also has a very good section in the back on cleaning vintage items. She does advise picking up certain supplies at Toys 'R' Us, wah-wah. This is a quick read, just be aware that some of her analysis, especially of the outfits, should be taken with a grain of salt. A lot of research has been done on this collectible and it is surprising how long certain myths prevailed. A 2nd edition was released in 1999, if I ever come across it I might have to see how quickly things changed in four years.