The Killing Song, Dragon Below #3 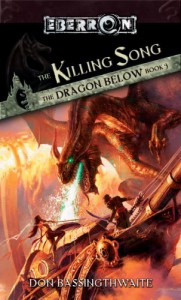 With the binding stones in hand, Dah'mir heads to Sharn to twist more kalashtar into service of the Master of Silence. To save innocents from madness he must be stopped. At the same time warnings have to be given to the orcs of the Fat Tusk to prevent Dah'mir's return to the Bonetree Mound if he succeeds in Sharn. Singe, Dandra, Ashi and Natrac head to Sharn, while Geth, Ortrac and the Dhakaani hobgoblin Ekhaas head overland back into the Shadow Marches.

Splitting storylines in books is always tricky (and breaks a D&D house rule - you never split the party!). Its hard to sustain action more than one direction without resorting to cliff-hangers and/or leaving a thread hanging for a hundred pages. Bassingthwaite keeps things interesting and rolls more interesting characters into the mix.

Up until now Bassingthwaite has avoided Sharn, but he does the city justice and with his portrait of the kalashtar district and its ways provides another look at an 'other' community in the Eberron world. I won't spoil anything, but all in all this was a spectacular finish.

A new adventure begins with these characters in Bassingthwaite's follow-up trilogy 'The Legacy of Dhakaan', first volume: 'The Doom of Kings'.

Next: 'The Doom of Kings'