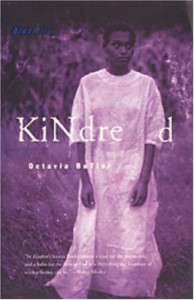 A feeling of nausea, a dizzy spell, and Dana opens her eyes not in her house, but on a muddy riverbank in time to save a boy from drowning. She finds herself back home, but covered in mud. This begins a terrifying ordeal where Dana doesn't know when she'll be taken again back, only that there is a connection between her and a sullen red-haired boy named Rufus in the early 19th century.

This was not the book I was expecting - I must have had my wires crossed with one of her other books - but 'Kindred' is phenomenal. We follow Dana as she is, sometimes for months at a time, trapped on Maryland plantation: a black woman with no traveling papers. Dana is a modern woman and as this is a first-person novel, we experience her thoughts as she attempts to rationalize her actions and those of the people around her. There is brutality, kindness, slow capitulation and sharp reminders of the era. There are decisions that Dana makes that defy comprehension, but I have no idea how I would react in a similar situation, so I find it hard to judge her. What made the bond between Dana and Rufus so strong? It goes well beyond self-interest.

All I know is that this book kept me reading late into the night, I couldn't put it down until I found out how Butler reached the ending hinted at in the beginning.