By the Light of the Study Lamp, Dana Girls #1 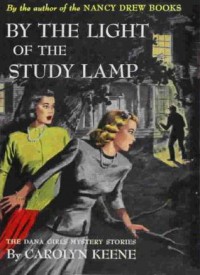 You're several years into a depression and of all your assets: Tom Swift, Bomba the Jungle Boy, and even the Bobbsey Twins, the one most people are interested in buying are two juvenile detective series. What's a publishing syndicate to do? Enter Louise and Jean Dana, orphan sisters who solve mysteries while attending the prestigious Starhurst School.

The Stratemeyer Syndicate was eager to match the success of the 'Hardy Boys' and 'Nancy Drew' when they created this sister series. Originally printed with lilac boards and jackets that featured bold deco designs highlighting the adventures within, the books are striking. Later printings in the 1950s would replace the cover design with the more modern picture-covers of the girls hiding in shrubbery and looking aghast at various scenes.

Notably, the entire back cover of the jacket - usually a valuable space used to advertise titles of another series - eagerly proclaimed that the 'Dana Girls' was written by the same author as Nancy Drew!

Of course, it wasn't. At least not at first. Credit for these books was given to 'Carolyn Keene', but in reality the first four books were written by Leslie McFarlane, the original writer of the bulk of the original Hardy Boys books under the 'Franklin W. Dixon' pseudonym. The syndicate needed another girls series and Harriet Stratemeyer Adams preferred working with McFarlane over the more opinionated Mildred A. Wirt who also wanted more money per manuscript. The first three books also were written in 1933, during which time Harriet had another ghostwriter writing Nancy.

Apparently, however, McFarlane disliked writing from a girl's perspective, especially under a female pseudonym. The poor dear. There were also problems with the increasingly lengthy and convoluted outlines McFarlane had to work from for the series, as well as his other Stratemeyer work.

That's a lot to get into before we even discuss the book itself! Despite McFarlane's lack of enthusiasm, I found the book to be fun reading. The only criticism is that the girls have an interchangeable personality - a similar problem plagued the Hardy Boys for awhile. To help you readers out, Louise is dark-haired and serious, while Jean is blonde, impulsive, and a year younger.

'By the Light of the Study Lamp' opens with the girls packing their trunks to go back to school for their sophomore year. A letter has arrived from their uncle, the captain of an Atlantic liner, informing them to keep an eye out for their farewell present, an antique lamp he is having delivered to the house. The girls are excited, because a lamp is precisely what they need for their shared study - at Starhurst girls have private study-rooms separate from their bedroom. When the lamp arrives the girls have only just unpacked it from the excelsior when they are brought to the hall by a shriek from Cora Appel, their aunt's clutzy maid who they refer to affectionately as "Applecore". A lot of time is spent developing her character considering she rarely shows up after this scene or in subsequent books.

After they calm Applecore down the girls return to the kitchen to find the lamp missing! How could it have been stolen so soon after its delivery, and why? The girl's search takes them to a shabby second-hand store with an obsequious shopkeeper who enjoys rubbing his fat hands together. There is also a glimpse of a mysterious gypsy-looking woman who the author takes pains to point out does not appear to be of Romany ancestry....thanks? The ungypsy will continue to turn up throughout the story.

Starhurst School was once a fine, private estate. The Star family fell on hard times, with the final blow being the theft of family heirlooms. The estate was sold to the Crandalls who run the school. A classmate and member of the old family, Evelyn Star, becomes close to the Dana girls this year when it appears her financial situation is becoming desperate. Her brother has gone missing and there may be no money for her tuition! She is too proud to accept a loan from the girls, so it is up to Danas to discover the whereabouts of Evelyn's brother as well as the secret of the lamp, which deepens when they find it - or one very similar - in the window of a nice second-hand store. They buy it for full price from the shopkeeper, angering their rival, the nouveau -riche and crass (oxymoron, am I right fellow elites?) Lettie Briggs, who was trying to haggle the price down despite her reputation as being the wealthiest girl at Starhurst.

There's a whole lot more going on with the plot, but I'm discovering that it is extremely hard to write about what happens in these books. There are dozens of coincidences and twists leading up to a fairly simple conclusion. This book was charming and holds up alongside its peers. Of course, you have to love this kind of thing (which I do!).

Next: 'The Secret at Lone Tree Cottage'