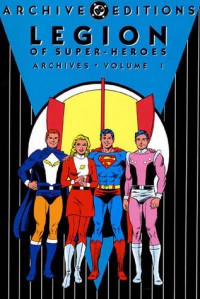 My neighbor growing up, his dad collected the DC Archives, hardbound editions collecting gold and silver age comic books. They were of phenomenal quality, and introduced me to the deeper history of Superman, Batman and The Flash, among others. A blast from the past!

I loved those books, I was allowed to borrow one at a time and devoured everything he had. My favorites though, were 'The Legion of Super Heroes', teens from the distant future (there was some confusion about their being 100 or 1000 years ahead) who had formed a super-hero club in honor of Superboy.

Since they were a 'Superboy' spin-off, they were rather silly at first, but these proto-typical X-Men struck a cord with me. By the end of this volume, the Legion is only beginning to gel into the story-telling dynamo it became, but it was a pleasure to be re-introduced to Lightning Lad, Saturn Girl, Cosmic Boy, and the rest (even Bouncing Boy).

These books can get crazy-expensive, so I don't know when I'll get to the next volumes, but I'll keep my eyes open.