Knife of Dreams, The Wheel of Time #11 by Robert Jordan 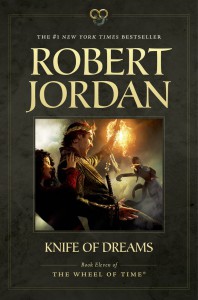 A wonderful return to form, bittersweet as this was the last book that Jordan completed before his death in 2007. After the near-endless politicking, skirt smoothing, and cups of tea and kaf of previous books real progress was being made and the reader could start to feel that the Last Battle was imminent.

'Crossroads' had ended with the capture of Egwene by the Aes Sedai of the White Tower, and we were left with the question of who betrayed her. It would seem no one did, Egwene was simply too visible and unprotected. With skillful use of the world of dreams she stays in contact with the rebels and begins to sow serious dissension within the White Tower. Siuan and Leane continue to sway in the background.

Perrin is the hero of the series just because he finally brings an end to the terrible slog that was the captured Faile plotline. He creates an interesting alliance to do it as well. To be fair, reading the Plotline of Doom this last time it wasn't so bad as it was reading it the first time and seeing no end in sight. Morgase, Alliandre, Two Others and Two Aiel are also rescued.

Rand attempts to orchestrate an alliance with the Seanchan and stop all of this conquest nonsense until the Last Battle is over with. His meeting with the supposed Daughter of the Nine Moons predictably ends in disaster (see the cover). Meanwhile, Loial is finally bundled off to his arranged marriage

Galad becomes leader of the White Cloaks in the best way possible, Elayne is finally Queen of Andor, Nynaeve helps Lan in unexpected and cool fashion raise up the Borderlands, and Mazrim Taim may not be Demandred (even if he's supposed to be), but is definitely not a good guy.

The biggest shoe to drop though was Thom's revelation to Mat that Moiraine is alive and held captive by the Snakes and Foxes. His marriage to Tuon fades into the background.

This novel raises plenty of questions, but it was mostly about laying to rest many old rumors, old plotlines, and finally gets everyone pointed towards the Last Battle. This was the book that really pulled me back into the series back in the day and then, of course, worried that we would never see the end of it.

Thankfully, there was a plan and Brandon Sanderson was brought in to finish the series. I liked what he did, but the fact remains we'll never know just how Jordan would have done it.

Up next I finally read the full-length 'New Spring' and have a last taste of pure Jordan before heading to the finish line.