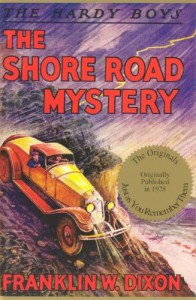 The Automobile Club of Bayport has passed a resolution: they urge the police to do everything in their power to stop the car thieves along the Shore Road. Thank heavens they did, or the police wouldn't have had the authority to start looking.

It's 1928 and people just want to have a good time in their automobiles, but they're afraid to stop along the Shore Road's numerous pull-offs, picnic grounds, and free beaches because their cars keep getting stolen! Often in broad daylight. Police in Bayport and in the cities on the other ends of the road are alerted, but no sign of the missing vehicles is reported, even though many are flashy roadsters and touring cars. On top of that some valuable cargo has been snatched up and the potential reward money makes the Hardy Boys see stars. When a chum and his father are falsely implicated in the crime, its time to put an end to these crooks for good!

This was fun and the boys actually had a clever (if dangerous) plan and put it into action as opposed to just stumbling upon a big fat arrow pointing to the solution. They were pretty casual about their use of guns, but as everyone in the book was white there was no racism...there's something wrong there....Anyway, there was a nice cameo from the Applegates, the rich brother and sister the Hardy Boys helped in 'The Tower Treasure'. It's nice when these series have characters appear more than once. As the series gets longer it was harder to work in plugs for the entire series at the very beginning so they're beginning to stretch them out a little. Speaking of characters, an enduring flaw to the series is the characterization of the Hardy Boys themselves. Other than hair color and age, there is really no telling the boys apart. Later revisions would make Frank more serious and Joe more impulsive, but a line here spoke of Joe being cautious and needing to restrain his brother. In these early stories, even though much of the other writing is better, they are essentially one character talking to themselves.

Next: 'The Secret of the Caves'