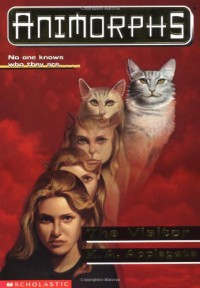 Rachel, Jake's fierce cousin, takes center stage in the second volume of 'Animorphs'. Applegate notes Rachel's traditionally good looks and athleticism, but stresses that it is what's inside that counts. Rachel is strong and impulsive, and often need to be reined in by her friend Cassie or Jake. She has clear ideas of what's right and wrong and hates to sacrifice her principles.

Since I'll be doing so many of these, I'll try to keep the reviews short. The main thrust of this book is Rachel's relationship with Melissa Chapman, an old friend and daughter of Assistant Principal Chapman, whom the group knows to be a high-ranking Yeerk Controller. They've drifted apart since Rachel was given her powers for obvious reasons, but Rachel is troubled by how changed her old friend has become. Is she being Controlled by a Yeerk now? Rachel must contemplate the value of her old friendship with the knowledge that could be learned by spying on Melissa.

It has only been a week or so since the events of 'The Invasion' and everyone is on edge. It is still impressive how these books juggle the main cast and their relationships with each other while still reminding readers of the wider world. The Animorphs can't draw attention to themselves without great risk, and the fact is that while they are all close friends now, they weren't always. The stress of dealing with the Yeerk invasion is hard enough, but they can't share their troubles with anyone, even their families. Who can be trusted when the enemy hides in plain sight? What should an Animorph do if they find themselves fighting a human or alien that has been possessed and is no longer in control of their body?

This book brings us closer to Rachel, and she may be one of the most consistent characters in the series. Great fun, and comes with an added bonus of talking about cat behaviors.