The Secret at the Hermitage, Dana Girls #5 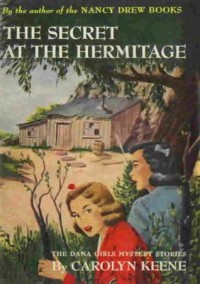 'The Secret at the Hermitage' wastes no time in signalling to the reader that there are changes afoot. Louise and Jean are relaxing in their room after classes joking about an item in the paper. Jean is "sprawled" on the window seat and is described as "inclining to boyishness". A suddenly cheeky Evelyn Star appears in the doorway joking about the school food and is invited to grab a cookie. A quick trip to a shop to get a wristwatch repaired is suggested and Jean rushes out to grab the hat she left in Doris Harland's room. Who are these girls? It's an unremarkable scene, except for that we've never seen anything half as natural so far in the Dana Girls books. Mildred Wirt Benson brings a little life to the archetypes.

As is becoming traditional, the latest mystery really begins with the girls giddy with excitement at the chance to escape from campus, if only for a few hours. The article they were reading earlier in the paper had to do with the former warden of the women's penitentiary in Penfield. Howard Norton had been dismissed for negligence, especially after the escape of an inmate. Little do they know they're going right into the heart of case.

They are surprised at the bus stop by Mrs. Grantland, the woman for whom they retrieved a pearl ring in 'Study Lamp', who offers them a ride into town with a quick stop so they can admire her newest hobby: art collecting. There they admire a particularly fine statue signed N.R. that Mrs. Grantland was told had been made by an inmate of the prison.

Later, in the shop where watch is being repaired, the girls are accosted by Norton. He is near-sighted and convinced that the sixteen year old Louise is the much older escaped convict Nina Regan! This begins a bizarre game of cat and mouse where Norton continues to pop up in distant woods, parlors, and other locations to accuse Louise of being Nina.

The Warden's menace is such that Lettie Briggs comes up with a brilliant prank to spook Louise on a field trip by dressing up as Norton and scaring her. It works, but unknown to the fleeing Lettie, Louise is hurt and accidentally left behind by the class. Louise is hurt, alone in the woods, and winds up in a stranger's car and deposited 40 miles from Starrhurst. A hermit finds her and offers her shelter for the night, which Louise takes, but is genuinely freaked out by the whole situation.

Are things not weird yet? That's because I've forgotten the girls digging deeper into the story of Nina Regan, her wrongful conviction, and the plight of another inmate who is separated from her sick child. The solution rests in the hands of Mrs. X.Y.Z., if Jean doesn't get eaten by a tiger first. Yeah. you read that right. A tiger.

Bring on more of these, please.

Next: 'The Circle of Footprints'