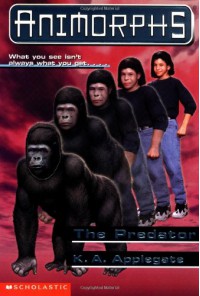 Marco was always my least favorite of the Animorphs. He always voted against missions, claimed he didn't like his super awesome powers, and made stupid jokes all the time. That was always theoretically balanced by the fact that he was dealing with a lot of grief at home. His mother had died, lost at sea, two years before, and his father left work and never went back. Being a jerk was a Marco's defense mechanism. Sure, that's a real thing, but ten-year-old me didn't have to like it, and I still don't.

Getting Marco's perspective did not add as much dimension to his character as it did the others on the team. He worries about his dad and what would happen if he never came back from a mission. The Animorphs keep getting into more dangerous territory and Marco wants out.

This book is important because it involves more development of the newest Animorph, Ax, and the decision to infiltrate a known Controller's office in an ant morph. It's best read, but that experience gets referenced a lot in later books.

The requisite set-piece ending was pretty damn cool, but doesn't make a whole lot of sense if you think twice, except as a necessity to keep the story going. And, since we've finished meeting the whole original team inside their heads I'm going to say Applegate probably never returns to the woman the team rescued from the Yeerk Pool back in 'Invasion'