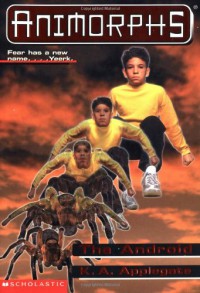 These last few installments have really focused on broadening the scope of the Animorphs Universe. Marco, while sneaking into a concert featuring the timeless musical acts The Offspring, Alanis Morrissette and Nine Inch Nails(!), spies an old friend handing out fliers for The Sharing.

The Sharing, remember, is the Yeerk's creepy cover organization that everyone appears to be just fine with, so Marco has every reasons to suspect that Erek is a Controller. Except....Erek had no smell, and in dog morph Marco and Jake cannot be mistaken on the subject, so what's up with that? The Chee is what.

The title makes certain things obvious, but there's some crazy deep lore going on that makes up for that. I distinctly remember being grossed out by the "our extra mass goes to z-space lol" explanation. I guess it had to go somewhere. That was not the craziest reveal. No one will guess, I had completely forgotten and it was so insane.

That discovery puts the Animorphs in the position to plan a crazy heist again where the stakes are high, but if they pull it off, they'll gain a powerful ally. What could go wrong?