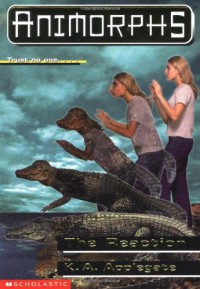 There have been some reviews that dimiss this as a filler novel, but I disagree. It was great to see Rachel and Cassie have a chance at being young girls for once. Plus, this has my favorite '90s references thus far. Casse's fear of embarrassment is hilarious. Her mom thinks that Boys II Men is pronounced Boys Eleven Men, first of all, and she may have been led to believe that NIN means Nice Is Neat. Whatever it takes to get mom to buy that CD, I respect that.

Some new intel has pointed out that the Yeerks are planning a PR campaign that will go a long way towards making 'The Sharing' the hottest organization in the country. I'm talking about the plan to enlist Jeremy Jason McCole, teen heartthrob star of "Power House", as the new spokesman for the group.

Obviously, Jeremy Jason McCole and his pouty lips are a reference to Jonathan Taylor Thomas of "Home Improvement" who was indeed in every teen and tween magazine out there in 1997. I guess you had to be there. Rachel and Cassie, much to the boys' consternation, are thrilled at the chance to rescue him from the Yeerks, but there's a problem.

Rachel has been having issues with morphing lately. Scary issues that involve unexpected morphing. This was a fascinating problem to throw into the books and a future hazard that could be revisited. I like the extra mechanics of morphing and Andalite technology that are being thrown in. I don't think I read this one growing up, soon I'll be completely into new territory. Reading on.