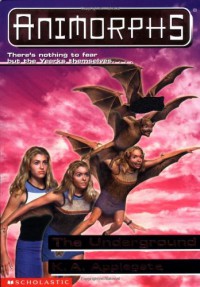 Without any Ellimist distractions, Tobias is finally able to share with the Animorphs the fruits of his surveillance efforts. The Yeerk Pool is located in a massive, constantly expanding cavern below downtown with many entrances and exits. Security has increased around the pool, however, since the Animorphs disastrous first visit back in 'Invasion'.

The Animorphs are going to have to be clever to get past the gates. Cassie has a brilliant idea and it is Rachel, fittingly since this is her book, who makes the final push. In doing so it explores Rachel's vulnerability which is often hidden from the other viewpoint characters.

Rachel's mother is a lawyer and she has an interesting new client, a client who claims an alien lives inside his head. This revelation leads to a fascinating connection between the Yeerks and Instant Maple Ginger Oatmeal.

Not a bad heist, but I have to point out, again, that a single video camera would help the Yeerks out more than any stolen Andalite technology.

Also, I guess its pretty clear now that the Animorphs are in Southern California, though what happened to those early concerns about winter? Eh.