Willows High is abuzz with the news: Juniors and Seniors can take a month of school to get a job! Of course, there are stipulations. One must have at least a B average and agree to write a report about their experience.

Barbie's well-connected parents know a couple in Florida who would only be too happy to host Barbie for the month and can pull strings at a television station down there. Barbie is also excited, because there's an exotic animal preserve where Midge could get work as well!

'Barbie in Television' follows the typical format for these books: Barbie gets spectacular opportunity, travels to an exciting location, crushes the opportunity like a boss and dates cute boy. I was hoping that the tease at the start of the book meant that Midge got to have some fun as well, but no dice. It turns out Midge was so focused on cheer-leading in the fall she let her grades slip and doesn't quite make it to the B+ her parents require, so she is denied permission to go on the trip.

Duest at least has Midge call Barbie out on her privilege: pointing out Barbie's internship in New York and being a cover girl for a teen magazine for God's sakes, but, Midge is forced to grin and bear it and be left behind in Willows with Ken and the rest. She also has to admit that its her own fault for trying to have everything the way Barbie does.

Carefree, Barbie is free to make new friends. Her companions are a Brazilian exchange student, Blanquita, who helps Barbie with her elocution and a hotshot baseball rookie, Danny Folger, who's on the cusp of going pro with the "Green Socks"

Barbie stands up to some serious toxic masculine behavior here, ignoring bad pickup lines and unapologeticly doing her job. She, of course, fixes him later, but we'll take the small victories the writers inserted into these books. Another highlight is working woman Pat Larkin, the station's program director who works full time and counts on her husband to take the roast out of the freezer.

Other than Midge's disappointment, the real reason this book gets a heavy star reduction is a "romantic" legend of a Native American warrior falling so in love with the daughter of a Spanish conquistador that after her death she is taken out into the bay and the warrior, plus 50-100 other braves sink their canoes and kill themselves so they can guard her resting place in the afterlife. This legend is the basis of an exciting festival and parade in the Florida town that Barbie visits and is the focus of her teen journalism. Is this based on reality? Because, wow, that's horrible. It certainly sounds like something midcentury America would celebrate.

Other key plot points involve a haunted ruin of a hotel and a mysterious hobo whose house Barbie and Blanquita break into. 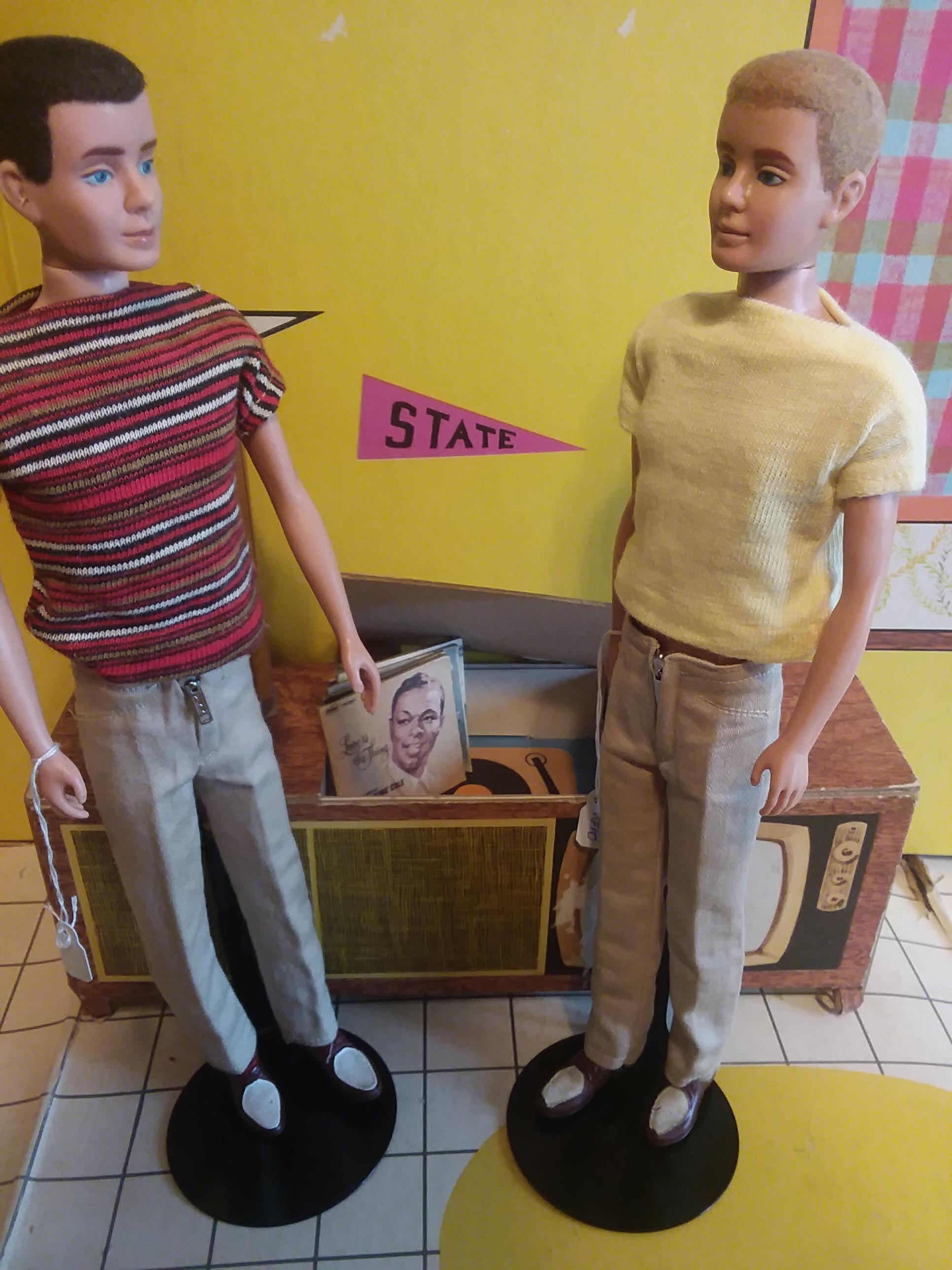 Two versions of 'Casuals' #782 from 1961-1964. The striped shirt is a later version. They're missing small gold car keys and I left off their red hats to show off their glorious, reflocked hair. Jon filled in the bald spots and followed the original pattern so they look mint!

Next: 'Barbie, Midge and Ken'