A Memory of Light, Wheel of Time #14 by Brandon Sanderson and Robert Jordan 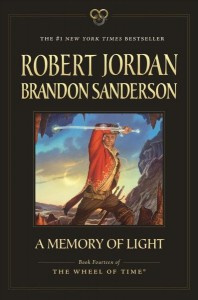 This series was a long road, there's never going to be anything like it for me ever again. There are other epic fantasies out there and there is one, still on-going, that I began around the same time I started this one - but, I'll admit it, 'A Song of Ice and Fire' can't match this. The Evil Empire is developing a fauxevision series of the show as I write this. It will be interesting to see them attempt it, but it won't be pretty. Gray Men can't make, duh.

This was my first time reading the entire series over again. The early novels I've read 6, 7, 8 times at least, but around the time I hit 'Winter's Heart' I wasn't feeling the love as strongly anymore. This reread, prompted by the 'Great American Read' (was it supposed to make me read something I hadn't before?), has made me fall in love all over again. Even with the typos that riddle these trade paperback editions. I've come to terms with the errors, the books still look pretty anyway, even if they aren't on the inside.

I also have to give huge amounts of credit to Leigh Butler, whose 'Wheel of Time Reread' on Tor.com made an excellent companion during my reading, helping me clear up long-standing questions and allowing me to see connections I never would have made on my own.

In my first review of the book I praised Sanderson, and my only real criticism was my feeling underwhelmed by the conclusion and having been bored during a lot of the endless battle scenes. Some of that still holds true, but reading the whole series so close together this past year makes me appreciate even more how cohesive the series was and, frankly, amazed that more threads weren't dropped. The ambition of this series still staggers me.

These books still made me laugh, shiver with anticipation, and gasp in surprise - Sanderson wasn't great on laughs, but he nailed other important aspects and nixed arms crossed over breasts, so - it is so nice to be able to say that this series has aged well. I'm going to read it again. There's a lot that could be said about the sequel series in Seanchan Jordan talked about writing, or the other prequel novels, but this is what we have and its enough.

Oh, and I've been reading the official companion now that I've read the whole series over. I have some thoughts.

Next: 'The Wheel of Time Companion'