There appears to be no depths that I won't sink to! I stumbled upon a stack of these in a shop when I was on the first doll hunt of spring. Random House isn't clear about there needing to be an order to the books (this and the story collection 'Here's Barbie' both appear at the top on the back cover on different books). Somehow, I don't think these books will be sticklers for continuity. (Edit: Later editions had numbers on the spines, this is #3)

It has been a very stressful, if rewarding, spring at the bookstore and in my small town - many of my reviews lately were written last fall, so it was fun to have the chance to go for our first good-weather antiquing run outside of our usual loop. At the first stop in Greenfield we didn't get a doll, but I did get more books to read!

16 year old Barbie Roberts has an important letter waiting for her as she and her friends gather on the steps of the high school. It's almost summer and it looks like all she and Midge have to look forward to is fetching balls for the boys while they play baseball. Which, come on girls. Barbie had submitted an essay and photo months ago to a prominent teen magazine for a contest to be an intern and model in New York City for two months, but she's given up hope.

Surprise! She got it. The plot is pretty thin, but there were three points I thought worth mentioning. First: The contest initially meant that Barbie and her mother would both be put up in a New York Hotel, but Barbie's mother has to decline because her place is in the home entertaining her husband's business friends! Barbie will stay with relatives in the city instead - they just happen to have an apartment on 5th avenue. A disappointed Barbie asks her mother if she ever wanted anything for herself. That's amazing and subversive.

This is countered, of course, by the only struggle Barbie has - she must lose 10lbs in the month before she begins modeling (and her ponytail gets cut!). I guess we take what victories we can. The rest of the book covers Barbie's semi-independent adventures in the city on the arm of the handsome Argentinian boy next door and her struggling actor cousin.

The writing is light and though Barbie reflects on the difficulties of modelling and fashion editing as careers we don't really see those hardships. Still, the other positive thing I noticed is that Barbie is given options in the book and allowed to make decisions about her future herself. This is interesting. Convention and a certain strong moral overtone - Ken has a deep conversation with her about how he doesn't have the right for a few years to even tell her how he feels - win the day, but I wonder if the writer slipped some more messages into the mix in the other books.

Lastly, we did get a few new things - this is a 1961 Barbie with her more mature bubblecut hairstyle in the 1963 outfit 'Career Girl' (it's missing long black gloves). The book is 1962, but we'll presume that Barbie is getting to model next year's fashions. 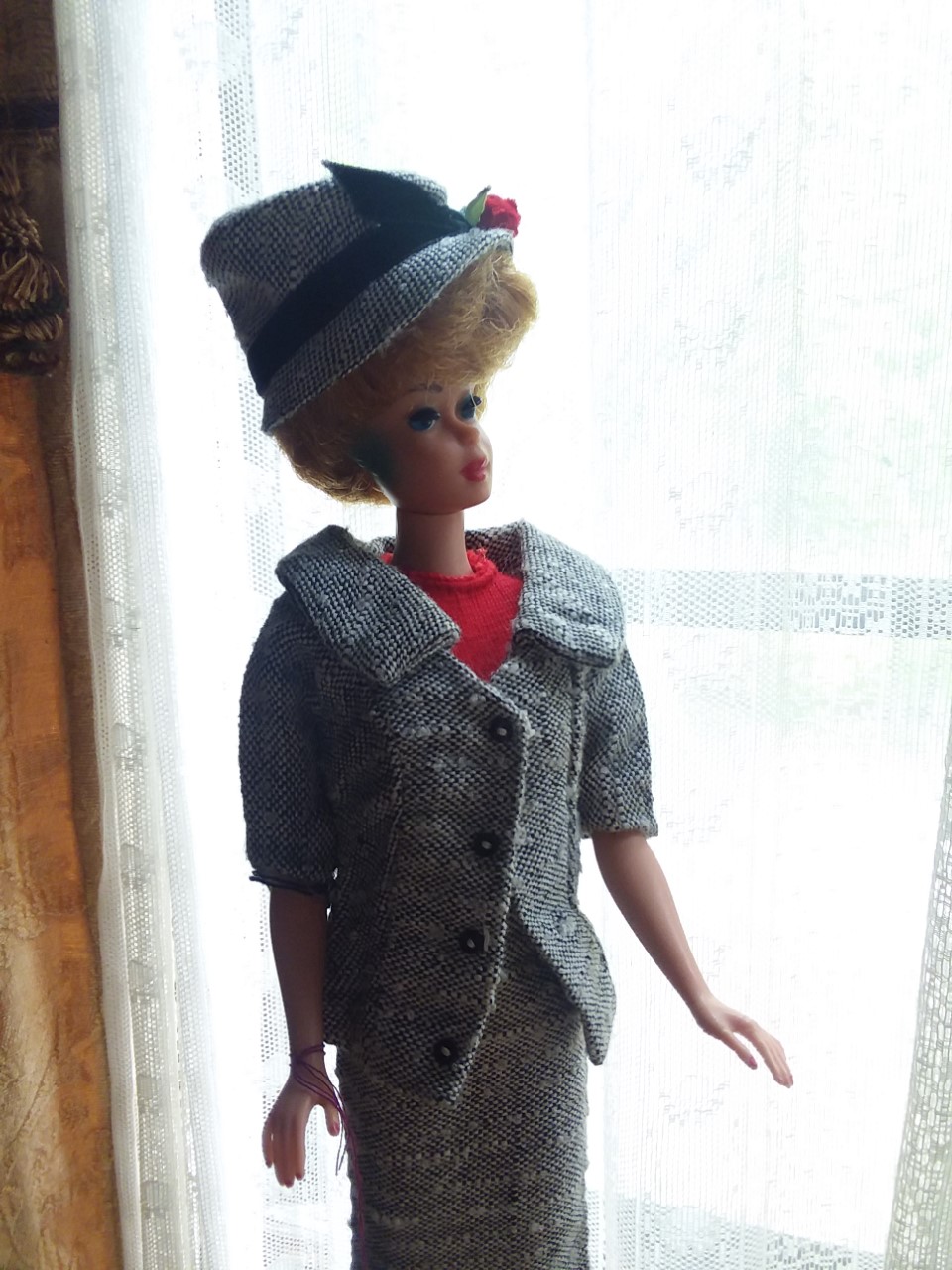 That hat though. Also, would anyone but the girls playing with Barbie believe that a 16 year old could be THAT glamorous?

Next: 'Barbie and Ken'